Mucinous cystic neoplasm (MCN) of the pancreas is a rare neoplasm affecting the elderly women. They vary in their clinical presentation and biological behavior. Spontaneous rupture of MCN is very rare and only eight cases have been reported so far in the English literature. We report a case of a young woman presenting with abdominal pain following spontaneous contained rupture of MCN managed with surgical resection.

Mucinous cystic neoplasm (MCN) of the pancreas is a rare neoplasm affecting the elderly women.1 They encompass a spectrum of biological behavior from benign cystadenoma to malignant cystadenocarcinomas. They are usually detected incidentally or during evaluation of the vague abdominal symptoms. Spontaneous rupture of MCN is very rare and only eight cases have been reported so far in the English literature. We report a case of a young woman presenting with abdominal pain following spontaneous contained rupture of MCN managed with surgical resection.

A 39-year-old woman presented to the surgical outpatient department with complaints of diffuse abdominal pain for 2 months. There was no other contributory history. Clinical examination was unremarkable except for fullness in the left hypochondrium. Contrast-enhanced computed tomography showed a large peripherally enhancing collection measuring 9.2 × 3.1 cm posteroinferior to proximal body of the stomach. Another peripherally enhancing collection measuring 4.7 × 3.8 cm was noted posteroinferior to the antropyloric region of stomach communicating with the previous collection. The collections were in close relation to the body and the tail of pancreas. Wall of the collection measured 2 to 3 mm in thickness with mild enhancement suggesting mild peritonitis. Endoscopic ultrasound confirmed the collection with aspiration showing mucoid material with no atypical cells on cytology. Fluid analysis showed elevated amylase (1,52,400 IU/L) and lipase (2,10,400 IU/L) with normal carcinoembryonic antigen (CEA) (3.59 ng/mL) and CA19-9 (87.27 U/mL). Magnetic resonance cholangiopancreatography (MRCP) confirmed the suspicion of pancreatic duct communication with an associated proximal duct dilatation (Fig. 1).

In view of mucinous aspirate and pancreatic ductal communication, distal pancreatectomy was planned. Intraoperatively, serous fluid of 300 mL in the lesser sac was found tracking along the superior border of the pancreas from body to tail and abutting the transverse mesocolon (Fig. 2). Pancreatic duct disruption was noted at the level of body with mucinous material around the duct (Fig. 2). Distal pancreatectomy with splenectomy was done. The patient had an uneventful postoperative period. Histopathological examination was consistent with the ruptured benign epithelial cystic lesion with ovarian type stroma arising from distal pancreas suggestive of the mucinous cystadenoma (Fig. 3). Twelve regional lymph nodes with reactive changes were also noted. Patient is doing fine at 6 months of follow-up.

Figs. 2A to C: Intraoperative image. (A) Collection bulging through the transverse colon (*). (B) After complete mobilization of the pancreatic tail and the spleen. (C) Opening of the fistula between the lesion and the pancreatic duct (solid black arrow) 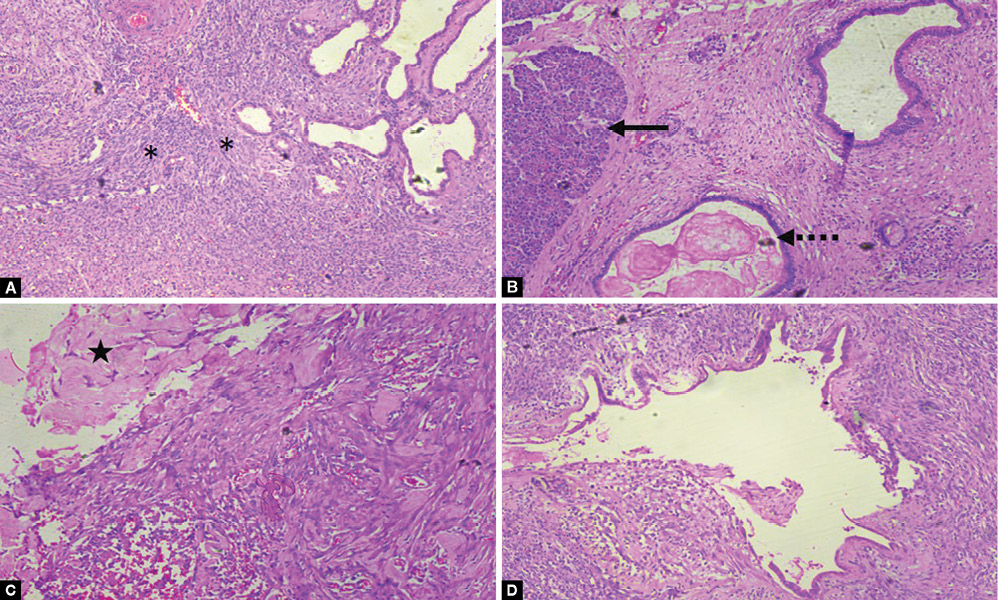 MCN of the pancreas represent 1% of pancreatic neoplasms affecting predominately women during the fifth and sixth decades.2 The tumor commonly affects the body and tail of the pancreas.3 De novo mucinous cystadenocarcinoma and malignant transformation of cystadenoma have been described.2 Given their insidious growth and predisposition for affecting the body and tail of the pancreas, patients are often asymptomatic or minimally affected.4 Significant symptoms such as jaundice, back pain, and weight loss may indicate invasive cystadenocarcinoma.4

Apart from malignant transformation, MCNs have very few complications. Spontaneous rupture is one such complication reported. Eight cases of spontaneous rupture of MCN have been reported in the English literature. Table 1 depicts the summary of these cases. The initial case reports were in pregnant women, suggesting a possible stimulation of estrogen or progesterone receptors found on the neoplasms by hormonal changes during pregnancy leading to a rapid increase in size and rupture. However, similar ruptures have been found in nonpregnant women and men. It is also interesting that the histology of the ruptured tumors range from cystadenoma to borderline tumors to even mucinous cystadenocarcinoma. Thus, the exact cause for such a complication is thus difficult to explain. Though the rupture is usually intraperitoneal, even retroperitoneal rupture has been reported.3

Our index patient was unique in many ways. While she was younger than the usual age of presentation, the subacute nature of the presentation of the contained rupture was not seen in the other cases reported. The imaging and the fluid analysis such as high amylase and normal CEA were favoring pseudocyst. However, the lack of clinical symptom suggestive of acute or chronic pancreatitis and mucinous aspirate suggested otherwise. Communication with pancreatic duct is known to occur in 7% of mucinous cystadenoma explaining the high amylase value and imaging of ductal communication.1 The presence of ovarian stroma differentiates it from the intraductal papillary mucinous neoplasm.10

Emergency surgical intervention was performed in all these cases except one that was incidentally detected during endoscopic retrograde cholangiopancreatogram.8 Excision of the tumor with curative intent has been the principle line of management. In a case of bleeding ruptured MCN, only splenic artery ligation was done by Woo et al.9 in view of biopsy-proven peritoneal disease.

The impact of spontaneous rupture of MCN on overall survival is difficult to ascertain, given the rarity of the complication. Though concerns have been raised about possible tumor spillage during the intervention performed for obtaining tissue or fluid, its impact on survival is not known. We believe that given the good survival shown by other reports, ruptured MCN, especially cystadenoma and borderline tumors, should not be equated to peritoneal involvement, and management should be radical excision with curative intent wherever feasible. In patients with ruptured malignant MCN, adjuvant therapy should be considered to improve overall survival.

Spontaneous rupture of cystic neoplasm of pancreas is an uncommon complication. Though more commonly reported in intraductal papillary mucinous neoplasm, clinicians should be aware that the MCNs can also rupture. Moreover, the outcome following rupture depends on the malignant potential of the MCN. Benign and borderline lesions require aggressive surgery to achieve complete cytoreduction and are associated with good overall survival. Malignant lesions have poor outcomes despite adjuvant chemotherapy.