Exchange Transfusion for Hyperbilirubinemia among Term and Near Term in NICU of a Tertiary Care Hospital of Bangladesh: Findings from a Prospective Study

How to cite this article: Dey SK, Jahan S, Jahan I, et al. Exchange Transfusion for Hyperbilirubinemia among Term and Near Term in NICU of a Tertiary Care Hospital of Bangladesh: Findings from a Prospective Study. Euroasian J Hepato-Gastroenterol 2021;11(1):21–26.

Background: Exchange transfusion in newborns is recommended as emergency management of hyperbilirubinemia to prevent bilirubin encephalopathy and kernicterus.

Results: Among 839 admitted cases of unconjugated hyperbilirubinemia, 41 patients (4.9%) required exchange transfusion. Most of the babies were inborn (90.2%). Ninety-five percent of mothers received regular antenatal care; among them, 76.3% had bad obstetric history. Only 36.6% of mothers received anti-D in previous pregnancy. None had sonographic findings of hydrops. The commonest indication was Rh incompatibility (80.5%). Coombs test was positive in 58.5% of cases. Mean pre-exchange TSB was 9.44 ± 6.4, and post-exchange TSB was 4.41 ± 2.59. The commonest adverse events noted were hyperglycemia (51.2%), sepsis (19.5%), anemia requiring top-up transfusion (17.1%), and hypocalcemia (14.6%). There were no catheter-related complications. Bilirubin encephalopathy was present in 4.9% of cases. There was one mortality but not due to the procedure.

Treatment modalities for significant hyperbilirubinemia requiring hospital admission are phototherapy and exchange transfusion.4 Exchange transfusion (ET) is considered as an effective and quick method to achieve safe bilirubin level in infants at high risk of kernicterus.4 Despite proven benefit, exchange transfusion might give rise to cardiovascular, biochemical, or hematological complications and mortality rates vary from 0.5 to 3.3%.2 Thus, current recommendation for exchange transfusion is based on seeking a balance between risk and benefit.5 Moreover, the introduction of anti-Rh (D)-specific immunoglobulin, intrauterine transfusions, prenatal monitoring, high-intensity phototherapies, and the use of nonspecific human immunoglobulin have made considerable contributions to reducing the indications for ET.6-10 Many of these technologies are not available or cost-effective in developing country, so reliance on exchange transfusion for the management of severe unconjugated hyperbilirubinemia is acceptable.

This prospective observational study was conducted in the NICU of Bangabandhu Sheikh Mujib Medical University, Bangladesh, from January 2016 to December 2019. Term and near term neonates who underwent exchange transfusion for significant unconjugated hyperbilirubinemia were enrolled in the study after taking informed written consent from the parents. Before doing the study, clearance was taken from Institutional Review Board (IRB). American Academy of Pediatrics recommendation 2004 was followed for identification, monitoring, and management of hyperbilirubinemic neonates of gestational age 35 weeks or more. Consideration of double volume exchange transfusion was also supplemented by the experience and knowledge of the clinician of the Department of Neonatology, Bangabandhu Sheikh Mujib Medical University. Preterm babies less than 35 weeks of gestational age, newborns presenting with direct hyperbilirubinemia, newborns with congenital malformation, and newborns requiring partial exchange transfusion were excluded from the study.

Baseline neonatal data and clinical information were obtained and recorded in a predesigned form. The age of onset of jaundice, postnatal age of NICU admission, postnatal age of performing double volume exchange transfusion, cause of hyperbilirubinemia, indication of exchange transfusion, and duration of hospitalization were recorded. A detailed history of the previous and current pregnancies was taken from the mother such as antenatal care, bad obstetric history including miscarriages, ectopic pregnancy, known alloimmunizations, blood transfusion, previous sib death, and H/O taking immunoglobulin. Women who received antenatal care at least four times were considered to have regular ANC. Antibody titer equal or more than 1:32 was considered as critical level. Intrauterine transfusion facility is not available in the study setting. Fetal condition was assessed by serial antenatal ultrasonogram in booked cases.

Rh incompatibility was defined as jaundice in Rh-positive newborns born to Rh-negative mothers with elevated antibody titers to the Rh antigen and evidence of hemolysis. ABO disease was attributed to the presence of jaundice in newborns of A or B type born to O-type mother with suggestive laboratory features of hemolysis. Significant hyperbilirubinemia was defined as hyperbilirubinemia in a newborn requiring hospital admission for either phototherapy or exchange transfusion or both. Double volume exchange transfusion (DVET) is defined as exchange of twice the circulating blood volume of the newborn.

Throughout the procedure, the baby was kept under radiant warmer. The baseline observations (temperature, heart rate, respiratory rate, blood pressure, oxygen saturations, and neurological status) were recorded prior to commencement, and vital signs were monitored by cardiac monitor continuously throughout the procedure. In all babies’ umbilical vein, catheterization was done under sterile conditions, using an umbilical venous catheter (UVC-5 fr for <3.5 kg infant and 8 fr for >3.5 kg infant for performing the procedure).

All patients were given phototherapy before and after the procedure. The baby was kept nil per os as soon as the decision was made to perform exchange transfusion. In case of Rh incompatibility, ABO-compatible to baby, RhD-negative RBCs were used when available; otherwise, O negative blood was used. In case of ABO incompatibility, group O, Rh-specific RBCs were used. In other conditions, ABO- and Rh-compatible blood was used. The blood was cross-matched with both baby and mother before exchange.

The procedure was performed by attending skilled senior residents of the NICU. After making sure that all connections are tight, pre-exchange sample was sent for TSB. Small amount of blood (5 mL/kg) was exchanged in each pass using the pull and push technique. Each pass (starting from the drawing of the baby’s blood per UVC, disposing of that old blood, followed by drawing donor blood and transfusing that blood into the infant) takes approximately 1.5 to 2 minutes for completion. No intermittent calcium was given during the procedure as per unit protocol. The procedure took 1 to 2 hours to complete.

Vital signs including SpO2 were monitored continuously during the procedure, 4 hourly for 24 hours and 8 hourly thereafter. Phototherapy was continued in post-exchange transfusion period until safe reduction of the bilirubin. Serum bilirubin, hematocrit, platelets, blood glucose, serum electrolytes, and ionized calcium were measured immediately after the DVET and serum bilirubin was monitored every 6-8 hourly until safe decline. DVET-related adverse events were defined as any complications that were not present before DVET and occurred during and within 3 days after the exchange. Complications observed were thrombocytopenia (platelet count <100,000/mm3), hypocalcemia (serum calcium level <7 mg/dL in preterm and <8 mg/dL in term babies), hyponatremia (serum sodium <135 mEq/L), hyperkalemia (serum potassium >5.5 mEq/L), hypoglycemia (random blood sugar <2.6 mmol/L), hyperglycemia (random blood sugar >7.8 mmol/L), bacteremia (detected colonization in the culture taken after ET), apnea, and cardiorespiratory arrest. UVC was kept in situ for 24 to 48 hours till further need of exchange transfusion was excluded. All the newborns were clinically followed up until discharge. Hearing screening was done at discharge or during the first follow-up. The newborns who developed sepsis were treated accordingly based on institutional protocol. Intravenous fluid was administered if the newborn had weight loss of 10% or more in comparison with birth weight. All the newborns were exclusively breast-fed. Outcomes were determined in terms of development of bilirubin encephalopathy, rebound hyperbilirubinemia requiring phototherapy, hearing impairment, and death.

The Statistical Package for the Social Sciences version 20 (IBM Inc., Armonk, New York, USA) was used for the data analysis, and p <0.05 was taken as statistically significant. Data were summarized as descriptive statistics, namely mean, median, frequency, and percentages.

Clinical diagnoses of enrolled hyperbilirubinemic newborns are presented in Table 2. More than three-fourth of babies (33/41, 80.5%) requiring exchange transfusion had Rh incompatibility, and four babies (9.8%) had ABO incompatibility. The remaining four patients were diagnosed with minor blood group incompatibility, hyperbilirubinemia in an infant of diabetic mother where no other cause could be identified, G6PD deficiency, and exaggerated physiological jaundice. 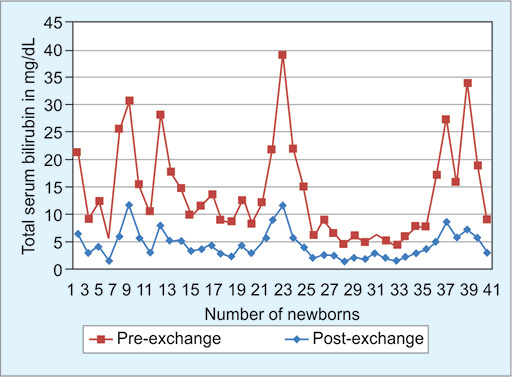 The overall outcome of the newborn underwent exchange transfusion is depicted in Table 5. Two babies (4.9%) had features of bilirubin encephalopathy. The requirement of phototherapy for rebound hyperbilirubinemia was found in four (13.7%) patients, and all of them were cases of Rh incompatibility. The duration of the hospital stay of enrolled newborns was 7.64 ± 4.69 days. Mortality was observed in one patient but not from exchange transfusion. There were no readmission and no hearing impairment.

Despite worldwide steady decline in the neonatal exchange transfusion rate, the risk of acute bilirubin encephalopathy and permanent neurological damage from severe hyperbilirubinemia due to delay in identification and lack of access to appropriate care in the context of low- and middle-income country is still remaining. Considering this background, this study was intended to share exchange transfusion experience in the NICU of a tertiary care center of Bangladesh.

In this study, 41/839 (4.9%) babies required exchange transfusion in 4 years. A prospective study done in Nepal reported 6% (29/481) over 14 months’ period.16 Much higher incidences 14.45% (50/346) and 22.1% (57/258) than this study have been reported by the other authors in a study done in Iran and Canada, respectively.18,19 On the contrary, much lower incidence (0.9 exchange transfusions per 1,000 live births) was documented in South Africa by Ballot et al.4 The dissimilarity may be due to the different enrollment criteria, diversity in the study population and settings, variation in the etiology of hyperbilirubinemia and different levels of bilirubin used for exchange transfusion, standard of antenatal care, and also availability and wide use of anti-D.

In this study, Rh incompatibility (80.5%) was the most common cause of hyperbilirubinemia, followed by ABO incompatibility (9.8%). The data of this study are consistent with published data because it was found that maternal alloimmunization on fetal antigens inherited from the father was a major cause of neonatal hyperbilirubinemia that required ET. According to Bujandric,12 76% of exchange transfusion procedures were performed because of acute hemolysis due to ABO and RhD incompatibilities. Similar findings were observed in a study conducted in Turkey from 2002 to 2008.21 In other studies, ABO incompatibility was found to be the most common cause for ET.16,18,19 In the current study, the other causes were minor blood group incompatibility, hyperbilirubinemia in an infant of diabetic mother, and G6PDH deficiency. In a study done by Chacham et al.,15 G6PD deficiency (27%) was the commonest cause, followed by Rh isoimmunization (23.4%) and ABO incompatibility (12.1%). A deficit of G6PD is often associated with severe hyperbilirubinemia requiring ET in newborns with lower concentrations of bilirubin. Reporting of a single patient among newborns requiring exchange transfusion reminds the need for G6PD screening in neonates.

The study was conducted in a tertiary hospital, so it is not necessarily representative of all babies with hyperbilirubinemia in Bangladesh. Preterm babies <35 weeks were not included in this study.

Exchange transfusion was required among 4.9% of the admitted newborns with unconjugated hyperbilirubinemia. Hemolytic disease of the newborn due to Rh incompatibility is the most common indication of exchange transfusion (80.5%). The common adverse effects were hyperglycemia and sepsis. The overall outcome was favorable.

The authors would like to appreciate the residents and staff nurses of the NICU for managing the enrolled newborns. They also feel grateful to the biochemistry, pathology, microbiology, and transfusion medicine departments of Bangabandhu Sheikh Mujib Medical University for their contribution in interpreting the results throughout the study period. They acknowledge mothers and newborns who participated in this study.