Aim: The present study aimed to investigate the effect of the presence of polyposis in sporadic early-onset colorectal cancer (EOCRC) on clinicopathological and oncological outcomes.

Methods: The retrospective study included patients with sporadic colorectal cancer aged 16 to 50 years who underwent curative resection at the general surgery clinics in two healthcare centers between 2013 and 2019. Patients were divided into two groups: polyposis and nonpolyposis. Clinicopathological characteristics and oncological outcomes were compared between the two groups.

Conclusion: Although the sporadic EOCRC cases developing on the basis of polyposis can have slightly better oncological outcomes, these outcomes are mostly similar to those of cases with nonpolyposis.

Colorectal cancer (CRC) accounts for approximately 10% of all annually diagnosed cancers and cancer-related deaths worldwide. CRC is the second most common cancer diagnosed in women and third leading cancer in men. The incidence rates of CRC in young adults (aged <50 years) are increasing in several countries, despite declining rates in older adults.1-3 A number of factors have been proposed for the increasing frequency and poor prognosis of early-onset CRC (EOCRC), including lack of routine screening before the age of 50, the unwillingness of the patients to apply to the physician, fast-food diets, increased alcohol and cigarette consumption, obesity, and clinician’s failure to examine the symptoms (e.g., rectal bleeding and change in bowel habits) as in old-age patients.4-6

Sporadic mutations in young individuals may lead to more aggressive tumor phenotypes, and hereditary CRC syndromes account for only 10 to 15% of EOCRCs. Although these rates are predicted to increase by the growing number of extensive studies investigating genetic mutations, most of the EOCRCs are sporadic.7,8 In familial polyposis syndromes, a significant decrease has been achieved in cancer-related mortality due to the effective use of screening programs and early surgery.9-11

The study protocol was approved by Dicle University Clinical Research Ethics Committee, and the study was conducted in accordance with the Helsinki Declaration. A written informed consent was obtained from each participant. The retrospective study included patients who were operatively treated due to CRC at the general surgery clinics in Dicle University Medical School and Elazığ City Hospital between 2013 and 2019. Patients aged 16 to 50 years who underwent curative resection and had complete follow-up records were included in the study. Patients who presented with recurrent cancers, those with a known history of inflammatory bowel disease, and those with hereditary nonpolyposis colorectal cancer (HNPCC) or congenital polyposis syndromes such as familial adenomatous polyposis (FAP) were excluded from the study. Additionally, patients who underwent palliative surgery, those who had nonmalignant polyposis, and those who developed early (within 90 days after surgery) and nondisease mortality were also excluded from the study. Polyposis was defined as the presence of ≥10 polyps in a colonoscopy or pathological analysis.

Data were collected from a variety of sources including electronic and medical records and endoscopic, radiological, and histopathological reports. Demographic characteristics including gender, age at diagnosis, mode of presentation (emergency or elective), and operative procedure (laparoscopic or open) were recorded for each patient. Oncological and surgical characteristics including the location of CRC, tumor stage (TNM and Union for International Cancer Control),12 and tumor differentiation were also recorded for each patient. Tumor locations were classified into two groups: colon and rectum. Histological types of tumors included adenocarcinoma, mucinous tumor, and signet ring cell carcinoma (SRCC). To evaluate the impact of polyposis on the outcomes of CRC, patients were divided into two groups: polyposis and nonpolyposis. Overall survival (OS) was defined as the time interval from the date of surgery to the date of death. For patients showing no signs of an event, the last follow-up data constituted the terminal record. Recurrence was defined as local or distant metastasis occurring after curative resection as proven by computer tomography, positron emission tomography, magnetic resonance imaging, or colonoscopy.

All statistical analyses were performed using Statistical Package for the Social Sciences (SPSS) (IBM, v.22.0, IBM SPSS Statistics, IBM Corporation, Armonk, New York). Patient demographics and clinicopathological characteristics were analyzed. Descriptive statistics such as mean ± standard deviation or median and interquartile range (IQR) were used for continuous variables and numbers and frequencies for categorical variables. For continuous variables, Kolmogorov–Smirnov test was used for normality of data distribution. Mann–Whitney U test and chi-square test were used for the analysis continuous and categorical data. The OS was estimated using the Kaplan–Meier method and the outcomes were compared using the log-rank test. Significant factors identified in univariate analysis were subsequently enrolled in the multivariate Cox proportional hazard model. A 2-tailed p level of <0.05 was considered significant. 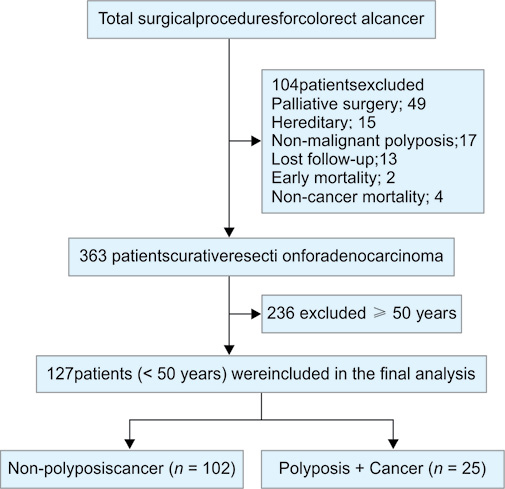 Fig. 1: Flowchart of this study

The median follow-up was 30 (IQR 8–90) months. Local and distant recurrences were detected in 40 (39.2%) and 7 (28.0%) patients and disease-related mortality occurred in 28 (27.5%) and 4 (16.0%) patients in the nonpolyposis and polyposis groups, respectively. Five-year OS was 60 and 72% in the nonpolyposis and polyposis groups, respectively, and no significant difference was found (p = 0.332). Figure 2 shows the Kaplan–Meier survival curves for both groups. Five-year disease-free survival (DFS) was 57.6 and 69.5% in the nonpolyposis and polyposis groups, respectively (p = 0.484, Fig. 3). In univariate analysis, AJCC tumor stage (pT) ≥3–4, lymph node positivity, presence of mucinous tumor and SRCC, lymphovascular invasion, and advanced TNM stage (III-IV) were found to be significant negative prognostic factors for OS, whereas none of these parameters were found to be prognostic factors in multivariate analysis. Moreover, the presence of polyposis was not a significant factor on both univariate and multivariate analyses (Table. 2). 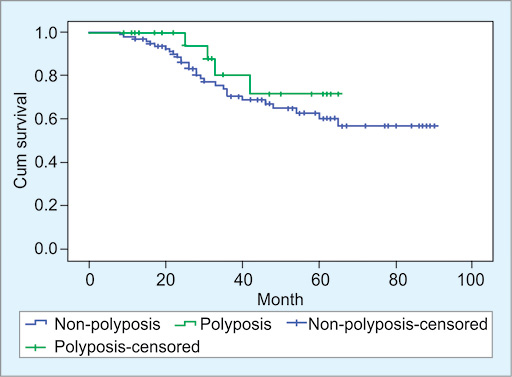 Fig. 2: Comparison of overall survival according to the polyposis of colorectal cancer. There were no differences among the polyposis and nonpolyposis groups (p = 0.332) 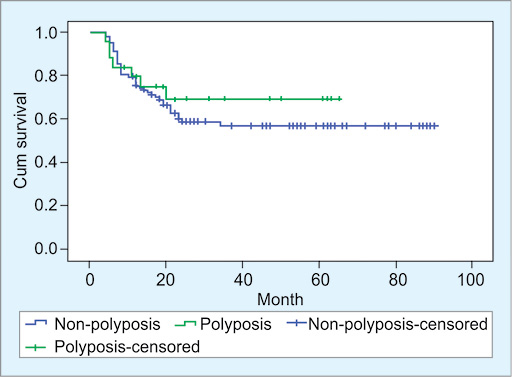 Fig. 3: Comparison of disease-free survival (DFS) according to the polyposis. No significant difference between the polyposis and nonpolyposis groups (p = 0.484)

The incidence of EOCRC has increased over the last decades, particularly in Europe, North America, Australia, and China.2,3,13-16 Although the cause of this trend is unknown, a combination of factors is likely to have contributed. A meta-analysis showed that weight gain is associated with an increased risk of CRC.17 Moreover, some other studies also reported that other risk factors such as lack of physical activity and increased alcohol intake and cigarette smoking may play a role.4,6,13 The rates of CRC caused by hereditary syndromes are relatively stable and the rates in young age-groups range between 10 and 20%.7,18,19 Including this population in screening programs and performing appropriate surgical procedures promptly provide a significant survival advantage.9-11 A number of factors including increased incidence of sporadic EOCRC, avoidance of screening colonoscopy in patients aged below 50 years, delayed diagnosis caused by patient- and physician-related factors, and unfavorable histological features such as poor differentiation and mucinous cell type have adverse effects on oncological outcomes. Accordingly, considering the sporadic nature of most of the EOCRC patients, it would be appropriate for clinicians to perform more detailed evaluations to prevent delay in diagnosis.20-22 Myers et al. reported that 12% of their young-age CRC cases were hereditary. Accordingly, we suggest that prompt administration of pancolonoscopy in the presence of symptoms such as rectal bleeding, abdominal pain, and changes in bowel habits will reduce the delay in diagnosis.23

In our study, 127 (34.9%) out of 363 patients were aged below 50 years. The findings obtained in the study support the increasing trend of EOCRC rates. Accordingly, we consider that the EOCRC rates will decrease as the screening of colonoscopies is expanded to younger ages. In our study, it was revealed that the rates of mucinous tumor, SRCC, and poor differentiation were lower in patients who developed cancer due to nonhereditary polyposis compared to patients with nonpolyposis (p = 0.042 and p = 0.015, respectively). However, the presence of polyposis was not detected as a prognostic factor in univariate and multivariate analyses. Moreover, although 5-year OS was higher in the polyposis group compared to the nonpolyposis group (72 vs 60%), no significant difference was observed (p = 0.332). Similarly, although 5-year DFS was lower in the nonpolyposis group compared to the polyposis group (57.6 vs 69.5%), no significant difference was established (p = 0.484). On the other hand, recurrence occurred in 40 (39.2%) and 7 (28.0%) patients in the nonpolyposis and polyposis groups, respectively. To our knowledge, this is the first study to compare the oncological outcomes of young patients with sporadic polyposis and nonpolyposis.

Studies investigating polyposis and oncological outcomes in young age populations have mostly focused on hereditary syndromes and have obtained similar or more favorable outcomes in patients with hereditary and sporadic CRC.7,9-11,24-26 An Italian study showed no survival advantage in 144 HNPCC patients who fulfilled the Amsterdam criteria when compared to 2035 patients with sporadic cancer. In the same study, 5-year OS was 56.9% in the HNPCC group as opposed to 50.6% in the sporadic group. Moreover, 5-year OS was 54.4% in FAP patients while no significant difference was established.24 By contrast, Brixen et al. evaluated 230 HNPCC patients and reported that 5-year OS was significantly higher in the HNPCC group than in the CRC group (70 vs 56%).27 CRC is diagnosed in a significant number of polyposis patients who are not included in the screening program but are examined due to symptoms; however, this rate is remarkably lower in patients included in screening programs.9 Patients with sporadic CRC are mostly diagnosed during the investigation of symptoms. A number of symptoms including diarrhea, mucoid discharge, bleeding, and abdominal pain have been shown to be more common in polyposis patients due to increased polyp burden, which in turn may increase the rates of physician referral and early diagnosis.28 In our study, the number of advanced stage (III–IV) patients was higher in the nonpolyposis group compared to the polyposis group (58.8 vs 36%). Similarly, the rates of poor differentiation and aggressive histological types including mucinous tumor and SRCC were higher in the nonpolyposis group compared to the polyposis group, although these parameters had no significant effect on OS.

Our study was limited since it had a retrospective design, a small patient population, and a relatively short follow-up period. Additionally, no genetic analysis was performed in most of the patients and no comparison was made with patients aged ≥50 years.

The incidence of EOCRC increasing worldwide and most of the cases are sporadic and develop on the basis of nonpolyposis. Although the EOCRC cases developing on the basis of polyposis can have slightly better oncological outcomes, these outcomes are mostly similar to those of cases with nonpolyposis. Further studies with larger patient series and longer follow-up periods are needed to substantiate our findings.