Lymph Node Ratio is an Important Prognostic Factor in Curatively Resected Gallbladder Carcinoma, Especially in Node-positive Patients: An Experience from Endemic Region in a Developing Country

2Department of Health and Family Welfare, Jammu and Kashmir, India

Our research studied the factors that predicted the recurrence of disease and survival of patients with gallbladder carcinoma who were treated with surgical resection, concentrating especially on the lymph nodal status as a prognostic factor and LNR in node-positive T1–T3 cases.

Results: Lymph nodal involvement was found to be a principal predictive factor in cases in whom radical cholecystectomy was done. The number of lymph nodes dissected determined the prognosis in N0 cases. LNR was a strong prognostic factor for DFS in cases of curatively resected gallbladder cancer.

Gallbladder carcinoma is a very aggressive malignancy with a dismal prognosis and about 5-year survival.1 The only chance for long-term survival is radical surgery mainly if patients are operated on in the early stage. In patients with resected gallbladder cancer, the presence of metastases in lymph nodes is an essential prognostic factor.2,3 Those cases who have metastases in lymph nodes have poor survival than those patients who do not have any nodal metastases.4 Radical lymph node dissection in gallbladder carcinoma has shown improved survival, and even some patients had long survival as reported in the literature with some cases of improved survival with nodal disease.5,6 Thus, nodal dissection has a crucial part in the treatment of gallbladder cancer.

In their paper, Choi et al. described that LNR is a significant independent prognostic factor in gallbladder carcinoma patients who underwent radical cholecystectomy.11 It is still not apparent if the LNR can replace lymph node count in the AJCC staging system. The new edition of the AJCC staging uses a different indicator of the N stage formed on the number of nodes involved in place of the location of involved nodes in the seventh edition.12

In view of the data reported above, our aim was to point out the factors that would predict cancer recurrence and also predict survival of gallbladder carcinoma patients at our institute who had undergone radical cholecystectomy, concentrating mainly on the prognostic value of lymph node status and LNR.

Between 2009 and 2014, 83 patients with gallbladder carcinoma underwent laparotomy at Mahavir Cancer Institute and Research Centre. Twenty-three of them were deemed to be either metastatic or unresectable. Rest 60 patients were reviewed retrospectively in whom radical cholecystectomy was done for gallbladder carcinoma (Fig. 1).

Fig. 1: Flowchart showing surgical management of all the patients with gallbladder cancer

The choice of the radicality of the procedure depends on the local extent of the tumor. Less aggressive resection was needed for early disease. The cases were followed up till July 2019, resulting in a follow-up period of ≥5 years or till the death of the patient. No case was censored during survival analysis.

The operation would consist of lymphadenectomy of the regional nodes, cholecystectomy, and about 2-cm nonanatomical wedge resection of gallbladder fossa, to attain the negative surgical margin. Lymphadenectomy included removal of nodes along the common hepatic artery, hepatic artery proper, cystic duct, common bile duct (CBD), and portal vein. CBD resection was performed if the cystic duct margin came out to be positive on the frozen section.

Lymph nodes were dissected from the resected specimen by the operating surgeon and were segregated into separate containers as per the locoregional stations. The positive lymph nodes were divided into three groups as per the AJCC eighth edition: N0, no regional lymph node metastasis; N1, metastases of 1 to 3 nodes; and N2, metastases of ≥4 nodes. The total count of nodes dissected and nodes with metastases were noted down for each patient. The LNR was calculated by dividing the total count of metastatic nodes by the total dissected nodes. Cases were segregated into three categories as per LNR: One category who did not have any nodal involvement (LNR = 0), the second category with LNR ≤ 0.5, and third category with LNR >0.5. After doing the statistical analyses, we found that this cutoff value was most discriminating.

We followed the patients for every 3 to 4 months for the first 2 years and every 6 months after that. We did clinical examination; tumor markers (CA19.0, CEA) and contrast-enhanced computed tomography were also done. If there was any suspicion of disease recurrence, we would do these tests earlier.

Adjuvant chemotherapy in the form of gemcitabine was given after resection if indicated. None of our patients received adjuvant radiotherapy.

We classified the recurrence as local or regional (liver bed or regional lymph nodes) and distant or both of these. Disease-free survival (DFS) was measured from the time of surgery to the time when recurrence of disease was diagnosed. The death of the patient was taken as due to the disease or because of some other causes so that disease-specific survival could be calculated.

Data were collected for 60 patients. Continuous data are presented as median. Categorical variables were compared using Chi-square test. Survival was calculated from diagnosis to death. The primary outcome was DFS and is measured as median ± standard error. Kaplan-Meier method was used for estimating survival. Cox proportional hazards regression model was used to calculate significant influence on survival. Multivariate logistic regression was used to determine the risk factors associated with disease recurrence. p <0.05 was considered statistically significant. 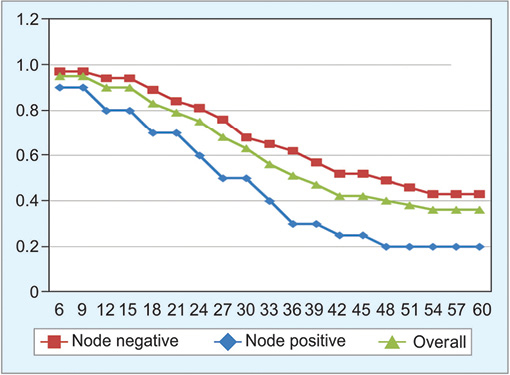 Stage IIIB cases include all N1 diseases with T1 to T3 in gallbladder carcinoma. In our study, we evaluated prognostic factors in node-positive cases of T1 to T3 diseases, that is, stage IIIB patients. On univariate analysis, the total number of metastatic nodes and higher LNR was clearly connected with significantly worse DFS in node-positive patients. However, multivariate analysis showed only higher LNR to be an independent prognostic factor of DFS in these cases (Table 4). Five-year DFS was 44% in cases who had LNR <0.5 (Fig. 3). The 5-year DFS was only 10% with a median survival time of 8.4 months for cases with a LNR >0.5 (Fig. 3). 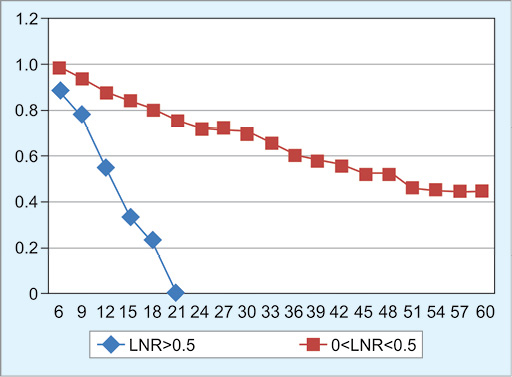 Our study showed that the gallbladder carcinoma patients who had nodal metastases had poor survival as compared to those of node-negative disease; though on multivariate analysis, node positivity did not show any significant effect on DFS. Nodal metastasis is a strong indicator of worse prognosis in patients who have advanced carcinoma of gallbladder.18 Japanese data revealed that the survival of patients is improved in those cases who had lymph node involvement restricted to the nodes in the hepatoduodenal ligament and who undergo lymph node dissection.19 Our data demonstrated 5-year survival of those cases who did not have any nodal metastases was 43% and that of those cases where there was nodal disease was 20% (p <0.001). Among those cases who had nodal metastases, the N2 stage falls in stage IVB according to the eighth AJCC and has very meager long-term survival chances. In comparison, cases of N1 nodal disease, that is, stage IIIB, usually have longer survival. So, it becomes important to choose long-term surviving patients within stage IIIB and to identify the prognostic factors.

If only the total number of affected lymph nodes is used as is in AJCC, it will lead to bias due to the chances of inadequate lymph nodal dissection. Many research papers have demonstrated LNR as an important prognostic factor for various gastrointestinal tumors. LNR, instead of a total number of lymph nodes dissected or a total number of metastatic lymph nodes, has an advantage due to various reasons. First of all, LNR is less susceptible to the phenomenon of stage migration. There are data available that have shown the superiority of LNR for gastric carcinoma as opposed to the usual staging of lymph nodes because it leads to stage migration.23 Additionally, comparison between the cases on the basis of lymph nodes involved may not be as accurate as LNR because LNR helps to provide a more practical comparison between cases with the same number of positive lymph nodes. As a sample, cases with three lymph nodes involved but the number of dissected lymph nodes are different (6 and 60) have different LNR (0.5 and 0.05). This example shows that the comparison between these two cases only on the basis of positive lymph node counts may not be correct. As such, it is better to consider LNR as a more practical variable to classify cases according to the extent of nodal involvement as well as appropriate lymph node dissection.

Lymph nodes dissected are a key prognostic factor in gallbladder carcinoma cases who underwent radical resection. The total number of lymph nodes dissected might have the impact on prognosis, particularly in node-negative, that is, N0 patients. In cases with node-positive T1 to T3 disease, that is, stage IIIB disease, a high LNR was shown as an accurate prognostic factor than the number of lymph nodes involved by metastases. LNR turned out to be a strong predictor of DFS despite controlling competing risk factors, particularly in stage IIIB patients. LNR has appeared as a strong prognostic factor and can be used as a classifying tool in further research evaluating adjuvant treatments.