Incidence of Stomach and Esophageal Cancers in Mongolia: Data from 2009 to 2018

Source of support: The current study was supported by Science and Technology Foundation, Ulaanbaatar, Mongolia (Grant No: SHUUZ2017/06). The sponsors have no role in the design of the study and in the collection, analysis, and interpretation of date in the present study

Purpose: We aimed to investigate the incidence of stomach and esophageal cancers in Mongolian population.

Materials and methods: Epidemiologic data were collected between 2009 and 2018 through the oncology departments of hospitals and medical centers in all provinces, soums (the smallest unit of provinces), and major districts of the capital city. We used appropriate statistical methods in SPSS software.

Conclusion: The incidences of these cancers have increased last 10 years in some provinces. Stomach and esophageal cancers incidence in Mongolia is considerably higher compared to the other Asian countries. The nationwide targeted prevention program is needed.

Mongolians have the highest incidence of stomach and esophageal cancers, age-standardized cancer death rates in the Asia Pacific region,1 which is underpinned by diagnosis at a later stage, common cancers associated with poor survival, and limited quality of health services.2 In Mongolia, a nationwide cancer registry database has been established in mid-1960s as a hospital-based registry in National Cancer Center, and the data quality of the cancer registry database has been sustained at an excellent level since the enactment of the data from the Center for Health Development Mongolia in mid-2000s.2,3

This study was designed as a descriptive method and data were collected from newly diagnosed cases of esophageal and stomach cancers in hospitals from 21 provinces and 9 districts of the capital city from 2009 to 2018. We collected data using the “Able Soft” program (Able Soft LLC, Ulaanbaatar, Mongolia). Stomach and esophageal cancers incidence data were collected from April, 2018 to December, 2019. The diagnosis of esophageal and stomach cancers was based on ICD-10 classification. The population number was referred from the official data of National Statistics Office of Mongolia.

The incidence of esophageal and stomach cancers in 21 provinces and 9 districts of the capital city was calculated as mean annual numbers per 100,000 populations. Age-standardized rate (ASR) was utilized by the direct method and it was rated by weighting age-specific incidence rates to the world population5 by following formula:

Nationwide esophageal and stomach cancers numbers were estimated per 100,000 populations and analyzed using following arithmetic mean at 5-, 5-, and 10-year intervals:

Ethical approval for this study was obtained from Ethics Committee of Ministry of Health on 26 July, 2017 (approval number: 22).

In the last 10 years (2009–2018) in Mongolia, more new cases of esophageal cancer were reported in western and eastern regions than the other zones. 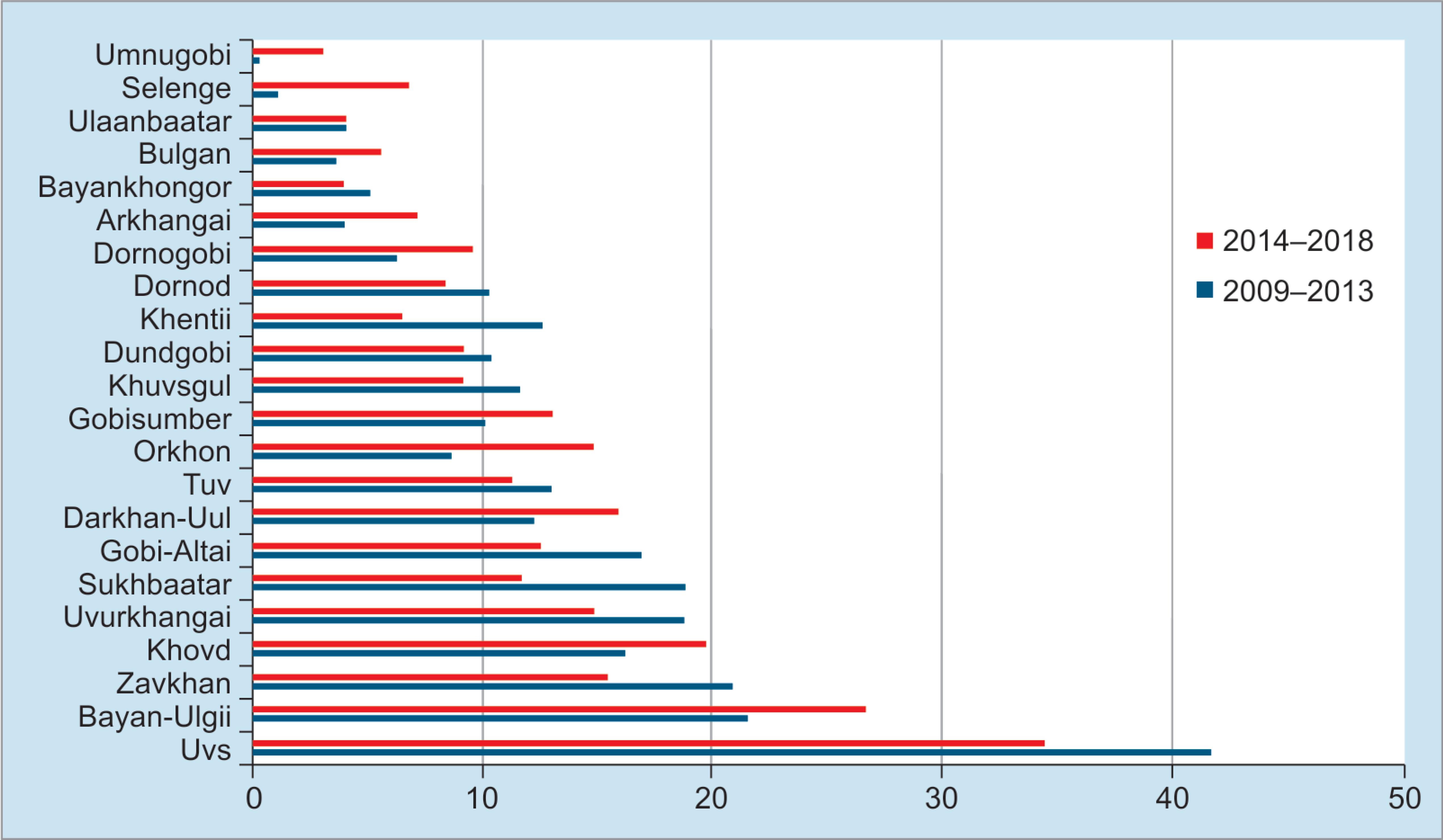 The average incidence rate of esophageal cancer for 5 years was increased in Arkhangai, Bayan-Ulgii, Bulgan, Gobisumber, Darkhan-Uul, Dornogobi, Orkhon, Umnugobi, Selenge, and Khovd provinces while the others were reduced. Therefore, Orkhon, Selenge, and Dornogobi were increased by 6.5, 5.67, and 3.62, respectively (from the first 5 years to the last 5 years) cases per 100,000 populations (Fig. 1).

Therefore, the geographical mapping of the incidence of esophageal cancer per 100,000 populations from 2009 to 2018 was particularly different from each other, which was higher in Western region (Fig. 2).

A total of 5,538 new stomach cancer cases were diagnosed in the country last 10 years (2009–2018). Likeliness to esophageal cancer, the rates were higher in Western region.

In the last 10 years (2009–2018) in Mongolia, more new cases of stomach cancer were reported in western and central regions than the other regions.

The 5-year average was reduced in Sukhbaatar, Gobi-Altai, Uvs, Bayankhongor, Dornod, and Dundgobi provinces while others increased. Orkhon, Bulgan, and Selenge were increased by 28.65, 21.88, and 11.6, respectively (from the first 5 years to the last 5 years) cases per 100,000 population (Fig. 3).

This descriptive study provides patterns of stomach and esophageal cancers incidence for 2009–2018 in Mongolia. We made this survey because of the high incidence rate in GLOBOCAN data.4 From the results of our study, the trend line of stomach cancer is increasing during last 10 years. The government of Mongolia have been developed some national programs, such as, “National Cancer Control Program 2007–2017, Mongolia”6 and “Cancer Registry Guidelines”2 to reduce the risk of common cancers including stomach and esophagus and to provide an effective control of cancer, and these essays were affected better registration of cancers of digestive organ. Better registration may influence the increasing incidence of the stomach cancer, but on the contrary, the actual number of cancer incidence is truly increasing. However, Chimed et al. reported that the incidence of stomach cancer in 2008–2012 was decreased.2 Interestingly, our results for last 10 years showed mild increase of stomach cancer. 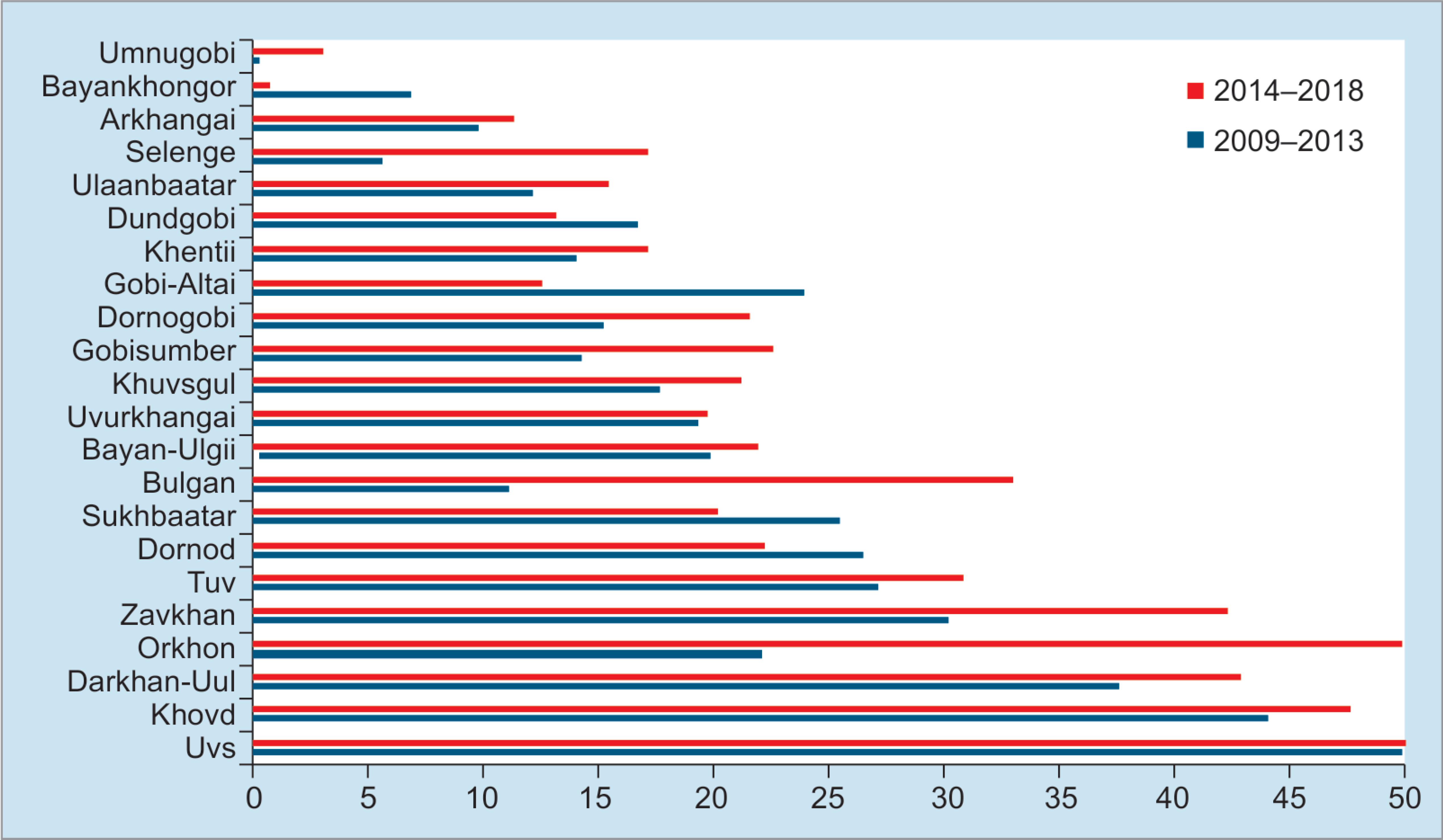 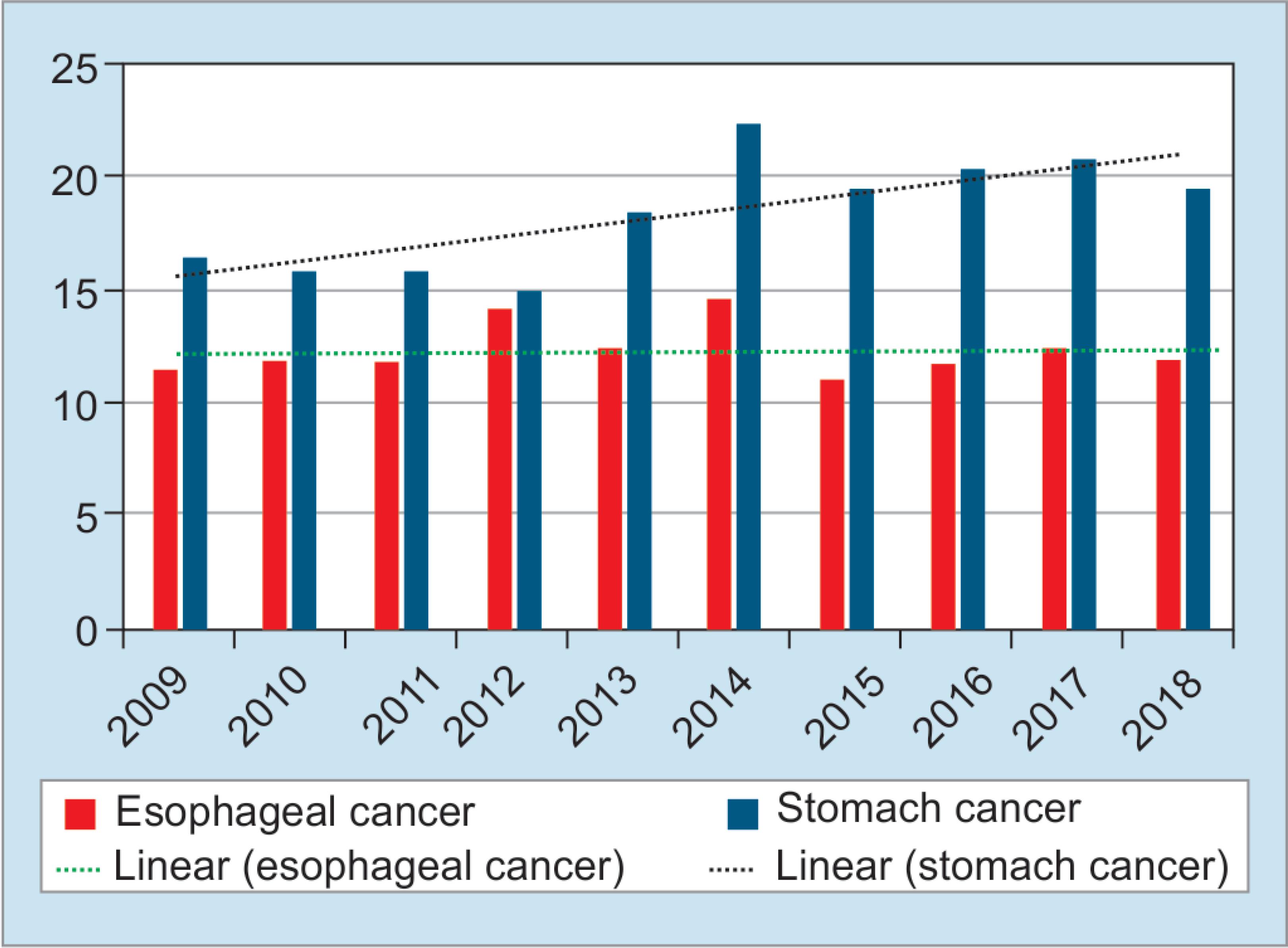 The presence of helicobacter pylori infection, overcrowded civilization in capital city, and poor living condition are associated with stomach cancer.12–14 Mongolia is the country which have high rate of helicobacter infection with 67–76% in patients with gastric complaints or early stomach cancer.15–17 Previous studies have shown that heavy alcohol use,18 smoking,19 low fruit and vegetable intake,20 the consumption of hot traditional tea or meals, and high consumption of meat7 are the risk factors of both stomach and esophageal cancers. In addition, the high prevalence of helicobacter pylori infection is associated with local antibiotic-resistance patterns.21

The residence of the capital city is having low incidence rate of esophageal and stomach cancers compared to the national average and the rural area. It might be related with the education, income, and living condition. However, the incidence of esophageal and stomach cancers is higher in Western part of Mongolia and these results are similar with the study of Chimed et al.2 According to Chimed et al. study, authors explained the regional difference of the incidence rate because of the utilization of limited resource of far rural area. Also they suggested that it is really needed to improve health education, especially in rural population.

Present study is a crucial overview of esophageal and stomach cancers burden, risk factor prevalence, and the prospects of prevention, using collected data of all hospitals over whole country and health departments of rural area. The National Cancer Registry of Mongolia is the main organization to register all cancer-related data. Unfortunately, gastrointestinal cancers often to be diagnosed at the late stage in developing countries, including Mongolia.8 The local researchers explained that it causes poor activities of early cancer detection program, lack of diagnostic equipment, and unsuccessful treatment.

The primary and secondary prevention program implementation affects to reduce an incidence and mortality in East Asian and other countries.25 According to the change of structure of the population, our health system requires a new guidelines and healthcare.

There is a considerable burden of esophageal and stomach cancers in Mongolia, especially in Western region. Most of the diagnosed cancers could be prevented. The activities or programs to prevent these cancers, especially in rural area, are in urgent need, but on the contrary, rural people need to improve their health education and change the lifestyle to prevent gastrointestinal cancers. However, cancer registry procedures including active collection of histology information were improved but there is still lack of researches to investigate the related factors of gastrointestinal cancers. Also there is a lack of cooperation between national organizations to accurate registration of gastrointestinal cancer and to fight against these harmful cancers. Further regard is needed to reduce the incidence of esophageal and gastric cancers, especially in rural areas.

We thank our colleagues from the department of Internal Medicine of Institute Medical Sciences, Mongolian National University of Medical Sciences; and researchers from National Center for Public Health and National Cancer Center, Mongolia who provided insight and expertise that greatly assisted for the research.