Aim: To evaluate the effect of the hepatitis C virus (HCV) genotype on prevalence and severity of liver disease in CHC.

Materials and methods: Nine hundred and forty-nine individuals with positive anti-HCV from June 2016 to May 2017 were enrolled in the study. We compared biochemical and hematological parameters, HCV RNA load, transient elastography, and ultrasound, in genotype 3 and nongenotype 3 patients. Cirrhosis was diagnosed in patients with liver stiffness measurement (LSM) ≥13 kPa.

Chronic hepatitis C (CHC) is an important cause of chronic liver disease, cirrhosis, hepatocellular carcinoma (HCC), and liver disease-related mortality. In the era of direct-acting antivirals (DAAs) with their excellent efficacy and safety, hepatitis C virus (HCV) infection still remains an important cause of chronic liver disease as these patients are largely asymptomatic till they develop significant fibrosis and cirrhosis. Various studies have evaluated the risk factors responsible for progression of fibrosis in chronic hepatitis C patients.1,2 These may be modifiable risk factors like alcohol consumption, cigarette smoking, hepatitis B and human immunodeficiency virus (HIV) coinfection, presence of obesity, diabetes mellitus, and metabolic syndrome. On the other hand, nonmodifiable risk factors like age at acquiring infection, sex, race, and HCV genotype have also been noted to influence rate of fibrosis progression.3 In earlier studies, it was observed that genotype 1 has faster rate of fibrosis progression than other genotypes.4 Later, Probst et al. in their meta-analysis showed a faster liver fibrosis progression rate in genotype 3 patients in single biopsy studies.5 Large retrospective and prospective data analysis of U.S. veterans has shown that genotype 3 is associated with increased risk of developing cirrhosis and HCC.6

With availability of DAAs as more effective and safer therapies, the goals in HCV management have shifted from treatment of individual patients toward HCV eradication and to achieve this, large community-based programs are being undertaken in India. In these programs, the treatment of chronic hepatitis C is aimed to target maximum number of HCV-infected individuals. Although, the combination therapy of sofosbuvir and daclatasvir has a good efficacy in noncirrhotic chronic hepatitis C patients, the efficacy in genotype 3 cirrhotic patients is less. Also, as more complete data of DAAs have emerged, it has become apparent that genotype 3 has a lower sustained virological response (SVR) rate than other genotypes especially in patients with cirrhosis and is emerging as a new treatment challenge. The present study has aimed to evaluate the effect of the hepatitis C genotype on prevalence and severity of liver disease in chronic hepatitis C patients.

The TE values in patients with ascites, elevated liver enzymes >5 ULN, and elevated bilirubin were not included into the study. The value of TE was expressed as median of minimum 10 readings of liver stiffness measurement (LSM) with interquartile range (IQR) <30%.

As per Castera et al.,7–9 cirrhosis was diagnosed with the LSM value >13 kPa in a patient or if elastography was contraindicated, then based on USG findings, i.e., nodular margins of liver, shrunken liver size, features suggestive of portal hypertension like portal vein diameter >14 mm, splenomegaly, presence of collaterals, and ascites.10,11 Patients with cirrhosis (as defined by LSM values and/or USG findings) were evaluated for decompensation of liver disease such as presence of jaundice, ascites, upper gastrointestinal bleed, and hepatic encephalopathy. All patients were grouped into genotype 3 and nongenotype 3. All biochemical parameters and TE values were compared among both the groups.

The quantitative variables were presented as mean with standard deviation/range and qualitative variables as proportions with percentages. All parametric and nonparametric variables were compared using the Student’s t test and the Mann–Whitney U test, respectively. The categorical variables were compared using the chi-square test and the Fisher exact test. The p value less than 0.05 was taken as significant. All the variables with p < 0.1 in the univariate analysis were included into the multivariate analysis by the backward conditional logistic regression analysis. The statistical analysis was performed using SPSS v20.

Total 949 individuals were found to be anti-HCV antibody positive by ELISA. Out of these, 843 patients had detectable HCV RNA by PCR and remaining 106 patients had undetectable HCV RNA (Flowchart 1). Seven patients had coinfection with hepatitis B, one had HIV coinfection and were excluded from the study. Among 835 patients, 542 had genotype 3 and 293 had nongenotype 3. Out of 835 patients, LSM values were available in 618 patients, which included 387 patients of genotype 3 and 231 patients of nongenotype 3. Transient elastography either failed or was contraindicated in remaining 217 patients due to presence of obesity, ascites, raised transaminases, or high bilirubin. 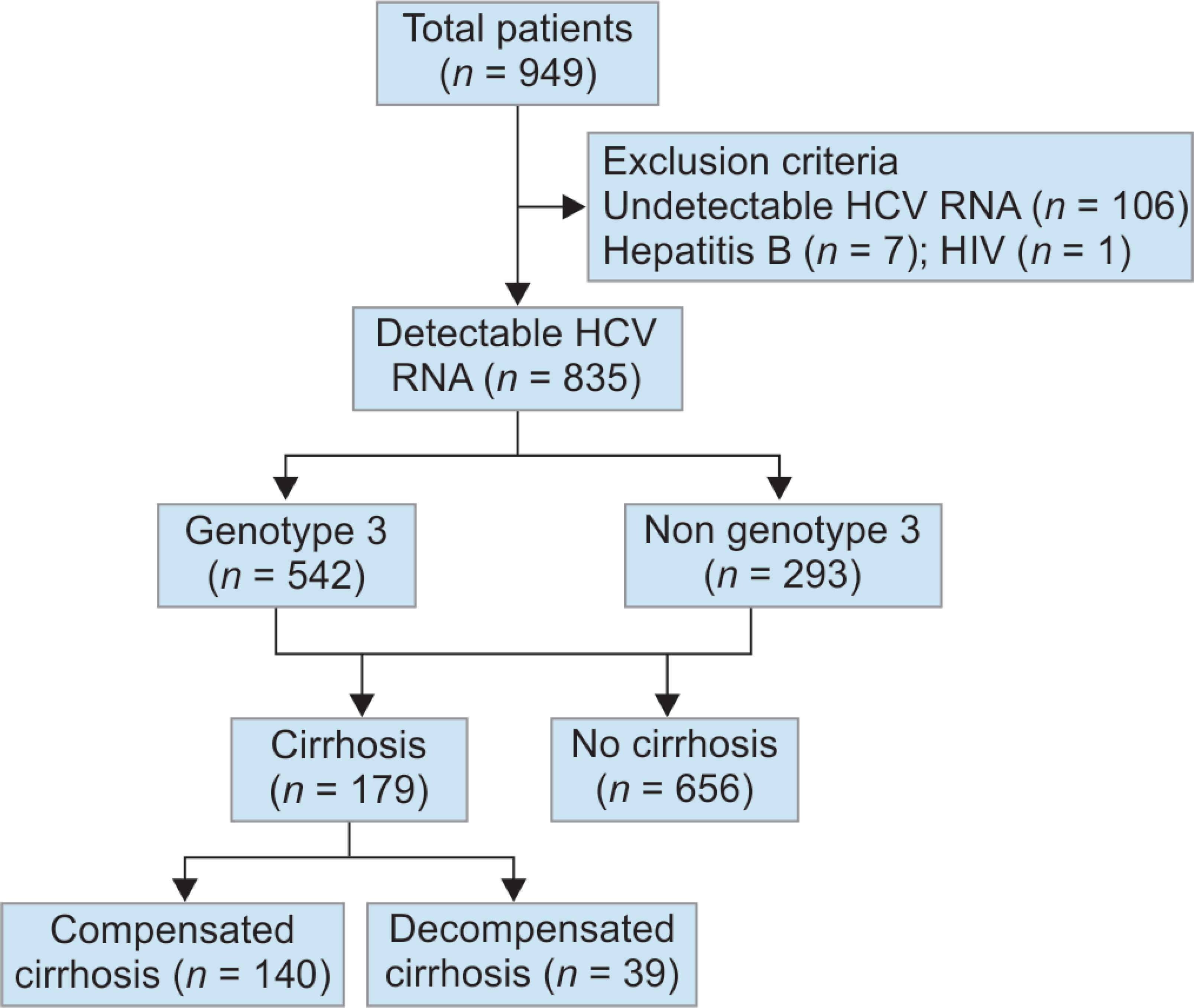 Flowchart 1: Flow of patients into the study

Cirrhosis was diagnosed by either TE or USG findings

pab = significant difference between no cirrhosis and cirrhosis

Lehman et al. showed that genotype 3 prevalence was higher among individuals who had spontaneously cleared HCV infection as compared to patients with chronic infection (86% vs 38%; p = 0.002). Moreover, the chronic infection was noted in higher number of individuals exposed to genotype 1 infection as compared to genotype 3 (93% vs 63%, p = 0.006).12 In the interferon era, genotype 3 had higher SVR rates as compared to other genotypes. It was suggested that perhaps genotype 3 induces higher interferon gene transcription in monocyte-macrophages and dendritic cell lines, which leads to increased immune clearance. At the same time, this enhanced interferon gene stimulation in nonparenchymal cells of the liver fastens the rate of fibrosis.13

In addition, HCV genotype 3 has been shown to be associated with hepatic steatosis and it is independent of presence of obesity, high body mass index, diabetes mellitus, age, and hepatic inflammation.14 Ryan et al.15 showed that genes of lipogenesis are not overexpressed in liver biopsies of hepatitis C-infected patients. In fact, the hepatic steatosis is due to overexpression of chemokines, which leads to increased stimulation of inflammatory cells within the liver. The association of genotype 3 and hepatic steatosis is suggested by its association with higher HCV viral load, presence of steatosis even in absence of metabolic risk factors, and the resolution of steatosis after SVR has been achieved post antiviral treatment.16,17 It has been suggested that in genotype 3 some genes like core protein are responsible for additional cytopathic effect, which morphologically present as hepatic steatosis.18

Bochud et al.19 also found faster progression of fibrosis in genotype 3 patients who were intravenous drug abusers as compared to those who acquired HCV infection through blood transfusion or needle injuries. De Nicola et al.20 showed lower mean time lag necessary for development of significant fibrosis in genotype 3 as compared to genotype 1 (28.3 years vs 21.8 years, p = 0.03), respectively. The enhanced interferon gene transcription, higher viral load, and hepatic steatosis are some mechanisms that may be responsible for fastened liver fibrosis, cirrhosis, and development of HCC.

The present study has some limitations. The liver biopsy is a gold standard for diagnosis of cirrhosis; however, it is an invasive procedure that is associated with complications like pain, bleeding, and mortality. Therefore, we have taken TE or ultrasonography as the diagnostic criteria for diagnosis of cirrhosis. The exact duration of HCV infection could not be determined in a majority of the patients due to poor socioeconomic and educational status and hence suboptimal history; however, this is a cross-sectional study and demonstrates increased prevalence of advanced fibrosis and cirrhosis in genotype 3 chronic hepatitis C patients compared to nongenotype 3 CHC patients, thus reflecting higher rates of progression in genotype 3 CHC patients. In future, we need more prospective studies to evaluate the impact of genotype on development of cirrhosis and HCC and also whether subgenotypes are also responsible. In the era of DAAs, when genotype 3 is emerging as a new treatment challenge, it is important to elucidate whether control of other metabolic and confounding factors can improve the overall outcome in these patients.

Genotype 3 patients have higher prevalence of fibrosis and cirrhosis indicating more severe liver disease than other genotypes. In our part of the world, genotype 3 is the predominant genotype. Advanced age, male sex, higher AST values, lower platelet counts, and higher LSM values should be carefully assessed in these patients for diagnosis of cirrhosis. The HCV treatment with DAAs does not reverse the cirrhosis and advanced fibrosis completely, and these patients need to be followed up regularly for development of decompensation and HCC.