How to cite this article Mishra D, Dash KR, Khatua C, et al. A Study on the Temporal Trends in the Etiology of Cirrhosis of Liver in Coastal Eastern Odisha. Euroasian J Hepato-Gastroenterol 2020;10(1):1–6.

Materials and methods: This is a retrospective study conducted in the Department of Gastroenterology, Srirama Chandra Bhanja Medical College and Hospital, Cuttack, from January 2005 to December 2017. Data were collected from hospital records of all patients admitted to the Gastroenterology unit. A Poisson regression model was used to compare the hospitalization rate for different etiologies of cirrhosis of liver. All data were analyzed using Stata version 5.1 software.

Conclusion: Alcohol is the most common cause of cirrhosis of liver and the burden of alcohol-related cirrhosis is significantly increasing in comparison to other causes including viral infection, nonalcoholic steatohepatitis (NASH), and autoimmune hepatitis.

Chronic liver disease (CLD) is a major cause of mortality and morbidity worldwide, accounting for approximately 2 million deaths per year. Moreover, there has been a 46% increase in cirrhosis mortality in the world from 1980 to 2013.1 Cirrhosis of liver, a final pathway for different types of CLDs is defined as diffuse fibrosis of liver parenchyma and the conversion of normal liver architecture into structurally abnormal nodules.2,3 Currently, cirrhosis and liver cancer cause 1.16 million and 788,000 deaths per year globally, respectively, making them the 11th and 16th most common causes of death, respectively.4 Together, they are responsible for 3.5% of all deaths worldwide.4 The major causes of cirrhosis of liver are alcohol and viral hepatitis.5,6 Other causes of liver cirrhosis include autoimmune diseases,7 fatty liver disease, and several inherited metabolic disorders.8 In India too, cirrhosis of liver is a major health problem. According to the latest WHO data published in 2017, liver disease deaths in India reached 259,749 or 2.95% of total deaths, accounting for one-fifth (18.3%) of all cirrhosis deaths globally.1,9 With the rapidly growing economy and changes in lifestyle and nutrition, it is presumed that the etiological factors of liver cirrhosis in India might have changed over the past few years. It has been reported that in India, alcohol consumption increased by 55% from 1992 to 2012 with doubling of per capita consumption between 2005 and 2016.10 Singh et al. in a study from eastern India reported that 50% of the patients with alcoholic liver disease started drinking before the legal age of drinking.11 At the same time, vaccination and effective treatment options have become available against viral hepatitis. Besides, nonalcoholic fatty liver disease (NAFLD) which was considered to be the most common liver disease in the western countries affecting approximately 20–30% of the general population12,13 is also increasing alarmingly in India assuming pandemic proportions with a prevalence rate of 14.6–42% due to the epidemics of obesity and metabolic syndrome in the last two decades.14 In the light of the recent changes in the risk factors associated with cirrhosis of liver, there might be changes in the etiological spectrum of cirrhosis of liver over the years. Although the etiological spectrum of CLD in India has been studied previously,15–29 most of these studies are cross-sectional studies. There are very scarce data on the trend of etiology of cirrhosis of liver over a period of time. India being a resource-constrained region, knowledge about the trends in etiology is highly essential for effective formulation of health policies especially for resource mobilization and allocation of funds for planning preventive measures since most of the causes of cirrhosis of liver are preventable. Hence, the aim of the study was to analyze the temporal trend in the etiologies of cirrhosis of the liver.

Data were obtained from hospital records of all patients admitted to the Department of Gastroenterology, Srirama Chandra Bhanja Medical College and Hospital, Cuttack, Odisha. As this is the only gastroenterology department in state run medical colleges of Odisha, it receives patients not only from every region of Odisha but also from the neighboring states of West Bengal and Jharkhand.

We obtained hospitalization records for the years 2005–2017. We selected the first hospitalization record of each patient as study record. We also recorded the total number of admissions in the Gastroenterology Department in each year. As this was a retrospective study, no consent was taken but the patient’s identities were concealed. The study was approved by the ‘Institutional Ethics Committee’.

Definitions Used in This Study

Etiology of cirrhosis of liver was ascertained according to standard clinical protocols. For the purpose of this study, chronic hepatitis B was defined as a positive test for hepatitis B surface antigen. Similarly, individuals with positive HCV antibody were defined as hepatitis C positive. ALD was presumed in subjects who reported excessive alcohol use (60–80 g alcohol per day for men, 40–60 g per day for women for 10 years or more) and had increased serum aminotransferase levels without other causes of liver disease. Subjects were presumed to have nonalcoholic steatohepatitis (NASH)-related cirrhosis, if they had cirrhosis along with diabetes mellitus or obesity (BMI %3E;25) in the absence of evidence of any other etiology, such as, excessive alcohol use, increased transferrin saturation, or a positive hepatitis B or hepatitis C test. Iron overload was defined as transferrin saturation >50%. Other etiologies like Wilson’s disease, autoimmune hepatitis, and primary biliary cirrhosis were diagnosed according to standard guidelines. In patients where no etiology could be ascertained were labeled as cryptogenic cirrhosis. For analysis of trend, patients of cirrhosis of the liver were grouped into three groups according to their etiology, the first group included patients with alcoholic liver disease, the second group included viral hepatitis, and the third group included all other causes of cirrhosis of liver like nonalcoholic fatty liver disease, autoimmune hepatitis, and cryptogenic cirrhosis. The percentage of each etiology among all patients of cirrhosis and all patients admitted to gastroenterology department was calculated.

All the categorical variables were presented as frequency (n) and percentage (%), and the continuous parameters were presented as mean ± standard deviation (SD). A Poisson regression model was used to estimate hospitalization rate ratio (RR). For the Poisson regression model, the ratios of various etiologies [numbers of patients with alcoholic liver disease (first group), viral hepatitis (second group), and other causes of cirrhosis (third group)] as numerator and the numbers of all patients admitted to gastroenterology department as denominator were treated as dependent variables. Year was treated as an independent variable with 2005 as the reference year. All the statistical analyses were carried out by using standard statistical software Stata version 5.1 (Stata Corp LP, College Station, Texas, USA). In Stata software, a command poisson with option IRR was used to estimate hospitalization rate ratio (RR). A p value of less than 0.01 was considered as statistically significant. 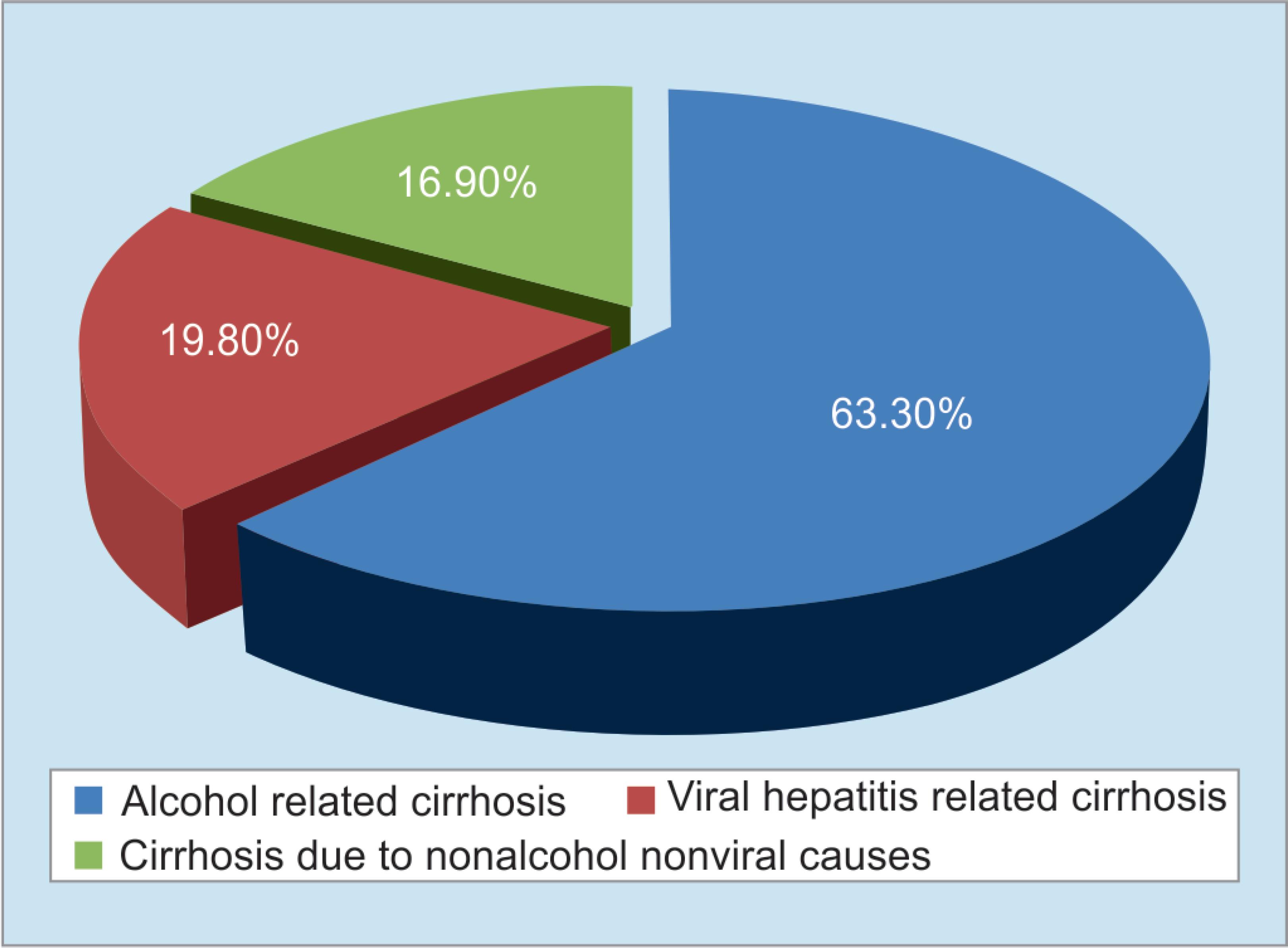 Fig. 1: Distribution of different etiologies of cirrhosis of liver 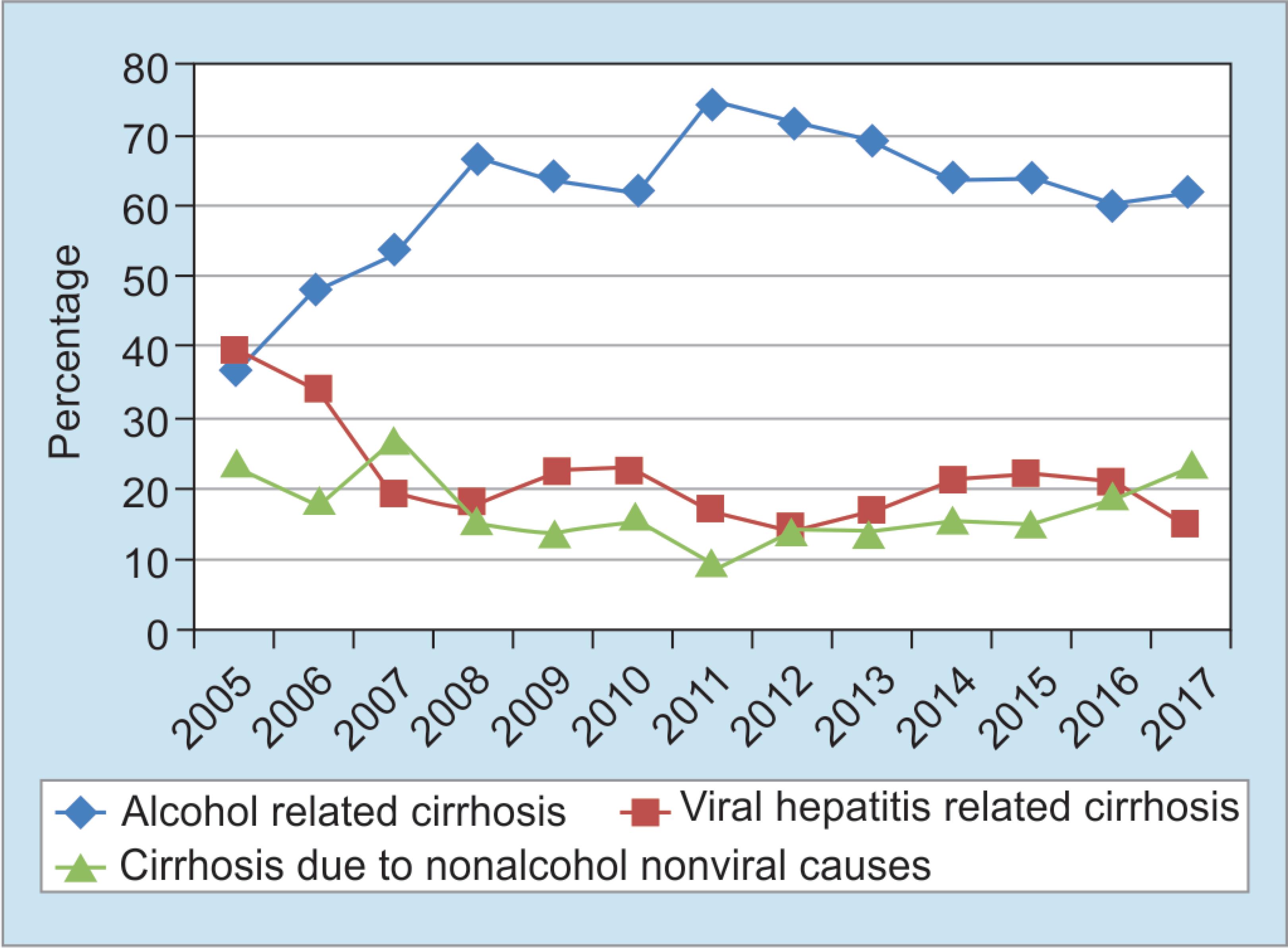 Table 3 shows the Poisson’s regression analysis of percentage of each etiology among all patients admitted to the Gastroenterology unit. As we see the trend of alcoholic-related cirrhosis, considering 2005 as a reference year, admission rate had been increased up to 2008 (95%), but decreased in subsequent year of 2009 (still 68% increased from the reference period), but again increased during 2010 and 2011. As observed in 2012 and onward, admission rate in gastroenterology seemed to be decreasing but still remained higher than the reference year. The proportion of alcohol-related cirrhosis increased by 26% from 2005 to 2017 (RR 1.26, p for trend <0.001). Keeping 2005 as a reference year, although there were ups and down observed in the admission rate of viral hepatitis-related cirrhosis of liver during later years, it was remarkably reduced by 73% (RR 0.27, p for trend <0.001) in the last year of 2017. Similarly, the proportion of cirrhosis of liver due to nonalcohol and nonviral causes decreased by 26% (RR 0.74, p for trend <0.001) by 2017.

Viral hepatitis was the second most common etiological factor in our study, which is similar to the findings of Sharma et al.18 However, some studies from India have found it to be the most common cause of cirrhosis of liver, but these studies are 2–3 decades old and there have been rapid changes in the epidemiology in the last few decades.16,17 Recently, a study from the same group had reported alcohol to be the commonest cause of cirrhosis of the liver.27 Viral hepatitis as an etiological factor for cirrhosis has clearly shown a decreasing trend in our study. This observation of decreasing trend is similar to the observations of Ray,28 Bao et al.,32 and Kim et al.33 Chiang et al. studied the 30-year outcomes of the National Hepatitis B Immunization Program in Taiwan and reported a continuous decline in age- and sex-adjusted rate ratios of CLD and hepatocellular carcinoma (HCC) mortality and HCC incidence for birth cohorts born after implementation of the program.35 However in India, universal vaccination against hepatitis B was included in the National Immunization Schedule in 2007–2008.36 Hence, this decrease in viral hepatitis as an etiology of cirrhosis of liver obviously cannot be explained due to the availability of vaccination against hepatitis B or blood bank screening, since it would take decades for these interventions to impact cirrhosis prevalence. Moreover, a previous study from the same center by Misra et al. had reported a vaccination rate of only 20% among 682 individuals and 30% among the children of the study subjects.37 This decreasing trend of viral infection as etiological factor of cirrhosis may however be explained due to the rising trend of alcohol as the etiology of cirrhosis of liver. When the viral group was divided into cirrhosis due to chronic hepatitis B and cirrhosis due to chronic hepatitis C, we found that the prevalence of hepatitis B as the etiology is much higher than hepatitis C. Chronic hepatitis C was the etiology of 5.5% of patients in 2005 which decreased to 0.7% in 2017. Mukherjee et al, in their multicenter study reported hepatitis C to be the causative factor in 21.6% of CLD patients from all over India whereas it was the etiological factor in 9.4% of CLD patients from eastern India.29 The prevalence of hepatitis C as an etiological factor of cirrhosis in our region was even lower than the prevalence reported by Mukherjee et al. and it showed a decreasing trend.

In our study, we defined nonalcohol and nonviral hepatitis-related cirrhosis to include every other etiology except viral hepatitis and alcohol. However, our definition is ambiguous and, therefore, the trend of the disease may be affected by various causes. There was a decreasing trend of this group from 2005 to 2011, with an increasing trend in subsequent years. Since the proportion of causes of cirrhosis is only a relative statistics, it can be affected by a variation in the proportion of other causes of cirrhosis. Besides, since this group also includes cirrhosis due to nonalcoholic fatty liver disease, the temporal trend might be a reflection of the rising trend of NAFLD in the population.38

Our study is fraught with significant limitations. Being a single center, retrospective study is a major limitation of our study; however, since our center is the only tertiary care hospital with gastroenterology unit in the state catering to patients from all socioeconomic status, the results of our study can be extrapolated to the whole region. Without histology, some patients might have wrongly been labeled as cryptogenic cirrhosis. Further, we have not studied the mortality rates due to the etiological factors which could have given more information.