An Enigmatic Liver Mass in a Child

Hepatic space occupying lesions in childhood are a diagnostic challenge, as they are caused by a variety of malignant and nonmalignant disorders with a different prognosis and, of course, treatment. They are often misdiagnosed or diagnosed only after surgical resection. A 14-year-old boy presented with abdominal pain, evening-rise fever with loss of appetite and weight. The patient also developed jaundice after 2 months of above symptoms. Ultrasound of the abdomen showed an irregular infiltrative mass in segment IV of the liver. Gadobenate disodium magnetic resonance imaging done showed T1 hypointense and T2 hyperintense lesions in segment VIII of the liver with extension into porta with delayed enhancement suggestive of fibrous tumor. Liver biopsy showed extensive liver parenchymal fibrosis with a mixed inflammatory infiltrate with eosinophils. Bacterial, tubercular, and fungal culture of liver biopsy were negative. Although serum IgG4 levels were 7.88 g/L (N =1.9 g/L), IgG4 staining of liver biopsy was negative. The patient was started on prednisolone 1 mg/kg considering the diagnosis of inflammatory pseudotumor (IPT). Twenty days after starting the steroid, mass lesions were converted into multicystic abscess requiring antibiotics and pigtail drainage. On follow-up, patient had improved symptoms with mass lesions turned into small-sized abscess cavity. Hepatic IPTs are difficult to differentiate from malignant tumors, as they are rare and can have variable imaging findings. To avoid inadvertent surgery, histological confirmation of the hepatic mass is essential. Steroids should be used with caution with close follow-up to prevent iatrogenic complications, such as a chronic liver abscess.

Hepatic space occupying lesions in childhood are a diagnostic challenge, as they are caused by a variety of malignant and nonmalignant disorders with a different prognosis and, of course treatment.

Despite recent advances in diagnostic imaging, sometimes it is difficult to differentiate between benign and malignant entities and most children should undergo a liver biopsy. Many children receive antitubercular therapy (ATT) or undergo surgery for possible malignant tumors without confirming diagnosis. We describe a case of a child with large apparent malignant hepatic space occupying lesion, initially treated as tubercular mass, turned out to be rare benign tumor that was managed conservatively.

A 14-year-old boy was referred to our center for right upper abdominal pain and fever for 4 months and jaundice for 2 months. There was no history of abdominal distension, hematemesis, melena, cough with expectoration, burning micturition, or diarrhea. The patient was pale, icteric, and had nontender hepatomegaly 5 cm below the costal margin. The spleen was palpable 3 cm below the left costal margin. There were no ascites.

The patient was previously evaluated elsewhere for these complaints. As shown in Table 1, the patient had hyperbilirubinemia, raised levels of alkaline phosphatase and γ-glutamyltransferase (GGT). The etiology could not be ascertained as serological tests for hepatitis B and C, echinococcus, and brucellosis were negative. Tumor markers (α-fetoprotein, carcinoembryonic antigen (CEA), carbohydrate antigen 19.9 (CA-19. 9)) were normal. Upper gastrointestinal endoscopy showed small esophageal varices.

Abdominal ultrasound was suggestive of hepatomegaly with well-defined iso-hypoechoic lesion with a peripheral rim of hypodensity in segment IV extending to I, III, V, and VIII measuring 8.2 × 9.5 × 8.3 cm with atypical appearance causing mild intrahepatic biliary radicles dilatation (IHBRD), portal vein thrombosis with formation of peri-portal and peri-gallbladder collaterals with moderate splenomegaly. Computed tomography of abdomen (Fig. 1) showed liver size 18.5 cm, large irregular ill-defined coalescing heterogenously enhancing lesion 8.6 × 7.4 × 6.6 cm in segment V, VIII, and IVA. The lesion was encasing the left hepatic duct with confluence and resultant IHBRD (left more than right), and also encasing hepatic artery. Portal vein was not visualized in its entire extent and was replaced by multiple collaterals in peri-choledochal area and at portahepatis. The spleen size was 14.6 cm. 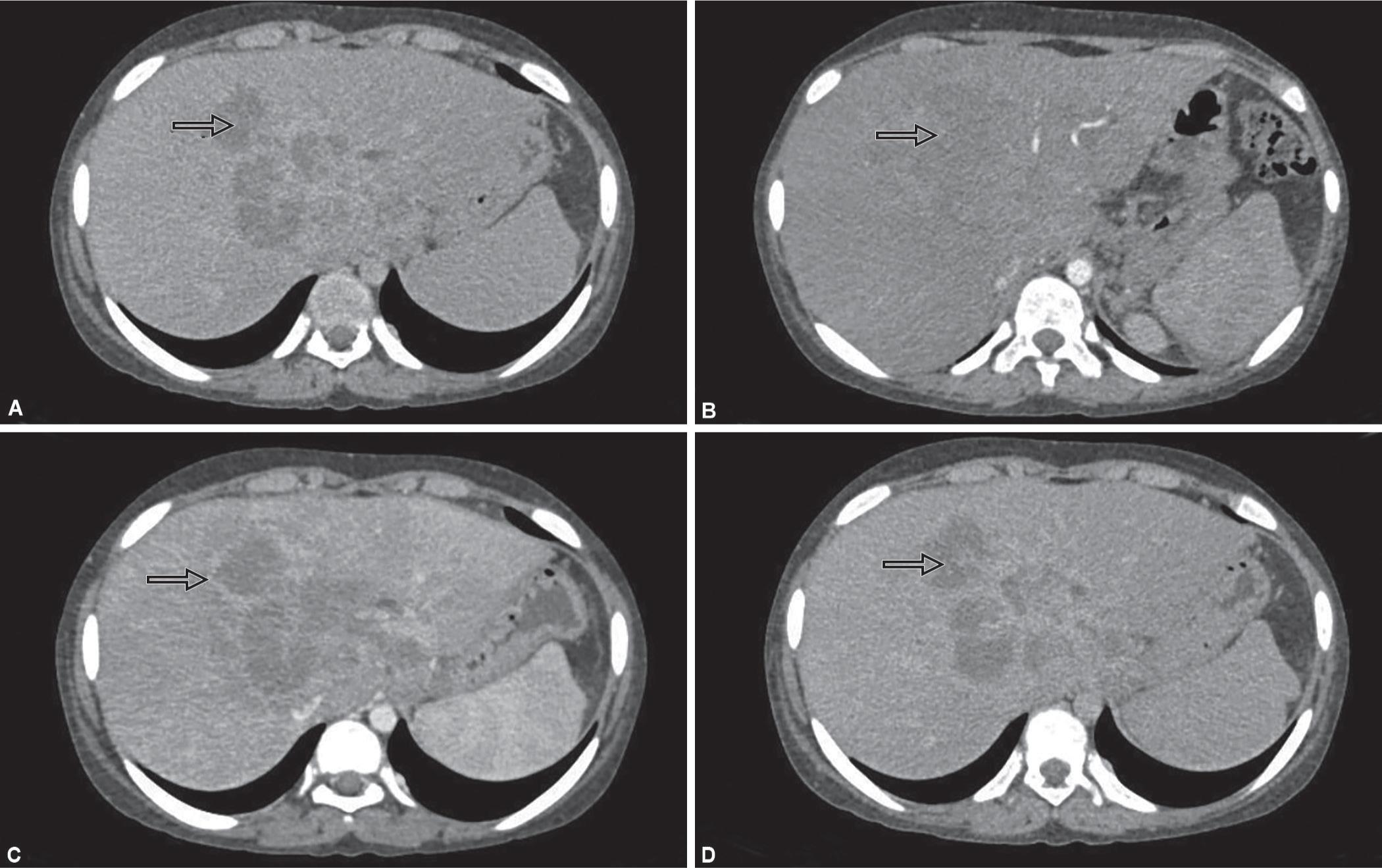 We reevaluated patient. The results of investigations revealed that his hemoglobin and bilirubin levels had decreased, while leucocytosis, γ-globulins, alkaline phosphatase, and GGT remained high (Table 1). Ultrasound abdomen demonstrated findings similar to the earlier examination although portal vein was replaced by cavernoma.

Although serum IgG4 levels were elevated (7.88 g/L, reference value: 1.9 g/L), IgG4 staining of liver biopsy was negative, in view of these findings, a diagnosis of IPT was made, ATT was discontinued, and treatment was initiated with oral prednisolone 1 mg/kg dose.

Ultrasound abdomen done in view of fever on the 20th day after initiation of treatment showed a large 10 × 10.5 × 12 cm loculated predominantly cystic lesion in the right lobe of the liver with internal septation, thick echoes with internal vascularity, and a few small foci of calcification. The patient was treated with intravenous meropenem (40 mg/kg/day, in two divided doses) and vancomycin (20 mg/kg/day in two divided doses) in view of growth of Klebsiella pneumoniae in the pus drained showing sensitivity to these antimicrobial agents. After 5 days of therapy, the draining fluid became purulent and greenish in color. The tests showed the presence of bile salts and bile pigments in the draining fluid, suggesting a bile leak.

The patient underwent endoscopic retrograde cholangio-pancreatography and left hepatic duct stenting. The drain output progressively decreased, though the abscess cavity did not collapse completely. The patient was discharged 14 days after the leak. He had two febrile episodes requiring intravenous antibiotic therapy over the past 3 months, clinically, he had no jaundice, had increased appetite and weight gain. Patient’s solid tumor has now developed into a chronic abscess cavity with a resultant decrease in the size of a cavity. 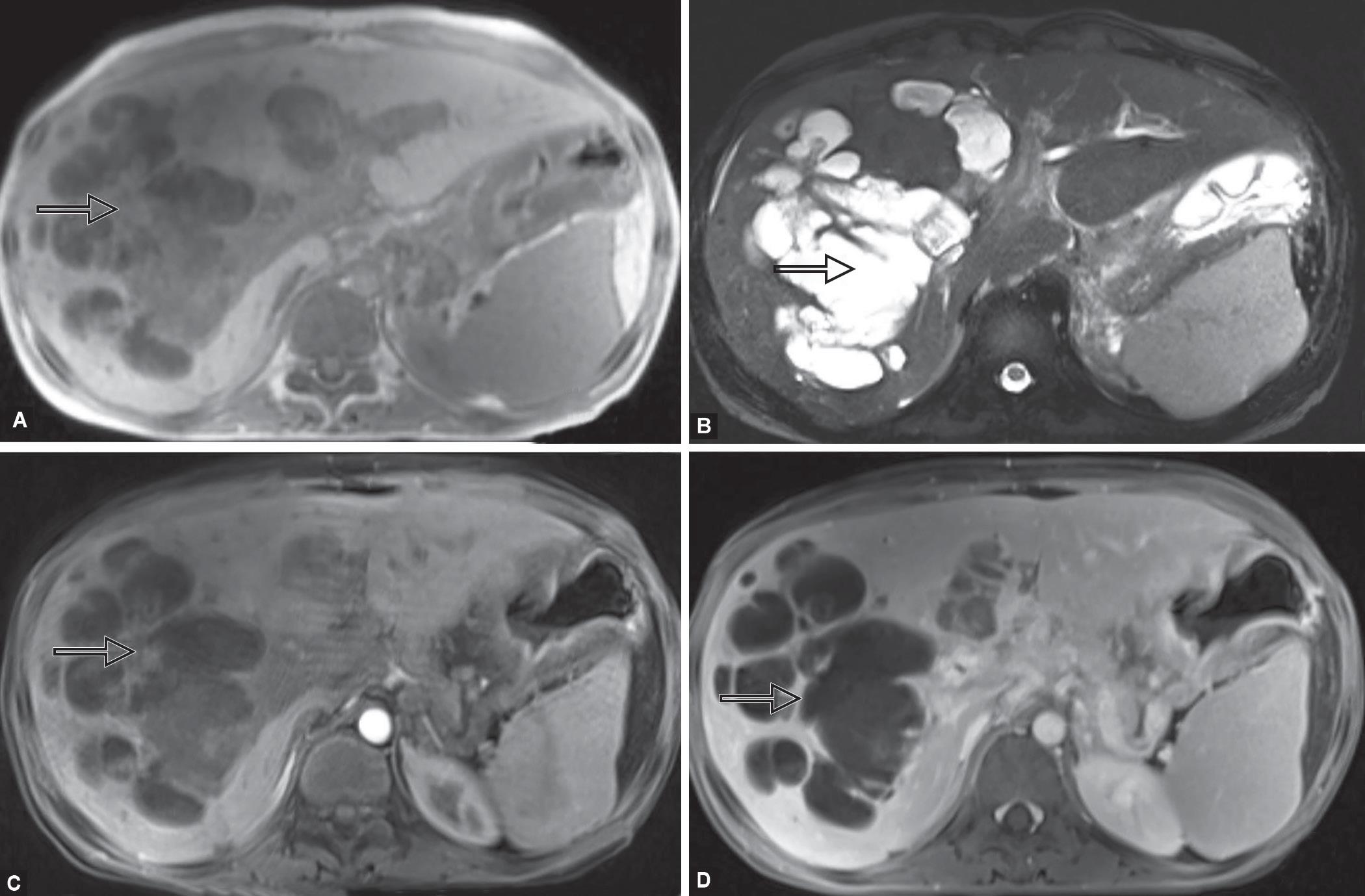 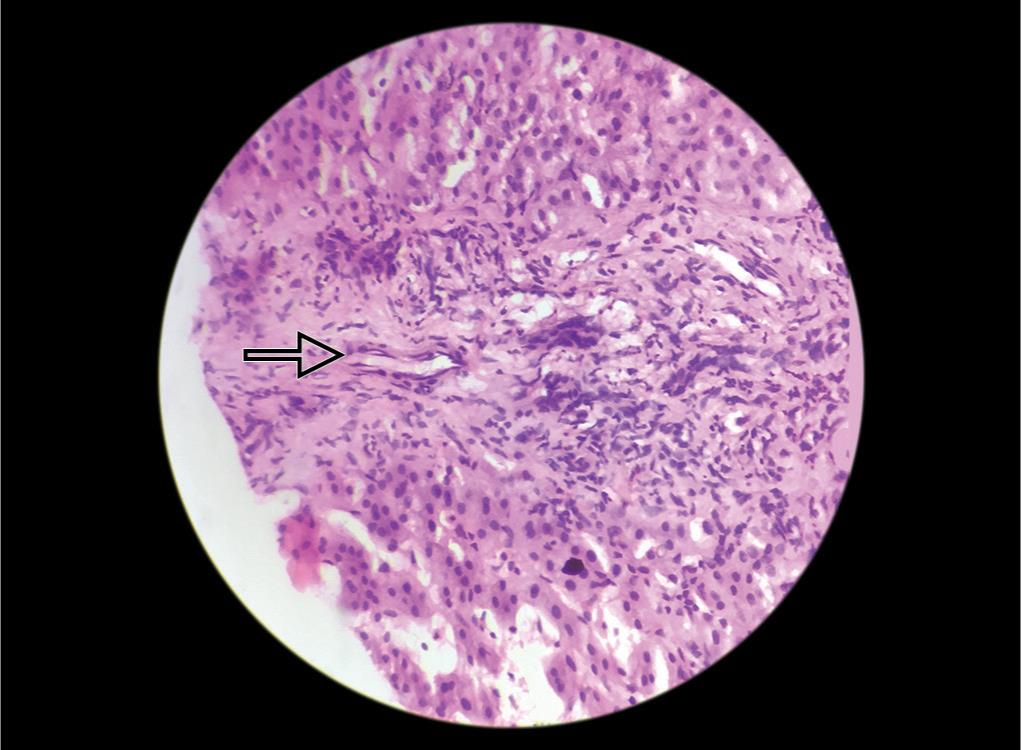 Inflammatory pseudotumor is a relatively rare disease characterized by chronic infiltration of inflammatory cells and the area of fibrosis.1 It is also known as plasma cell granuloma due to the predominance of plasma cells in the lesion.2 Inflammatory pseudotumor occurs most commonly in the lung, rarely found in other locations, including eye, spleen, lymph node, and liver.3–5 Etiology of hepatic IPT remains uncertain although, infectious condition, an autoimmune phenomenon (IgG4-related diseases), or local inflammatory changes of cholangitis have been suggested as possible etiologies.6–10

It is difficult to differentiate IPT of liver from malignant tumors, such as atypical hepatocellular carcinoma, intrahepatic cholangiocarcinoma, and metastatic cancer11,12 or liver abscess showing incomplete liquefaction and granulation.13,14

Age of presentation can range from 3 months to 15 years with an almost equal male-to-female ratio. Fever 40%, abdominal pain 43%, and abdominal mass 28% are major symptoms, constitutional symptoms, such as anorexia, weight loss, and night sweats were seen in one-fifth of patients. Jaundice at presentation is caused by the presence of tumor in the porta hepatis. Tumor would be a single lesion almost >90% of time with size ranging from 2 cm to 14 cm. α-Fetoprotein level would be normal.15,16

There are two major subtypes based on histological features, namely, lymphoplasmacytic and fibrohistiocytic types. The lymphoplasmacytic type is defined by an inflammatory process, mainly involving lymphoplasmacytic infiltration (IgG4 positive plasma cells), obliterative phlebitis and cholangitis with periductal fibrosis are common features. Lesions are usually found around the hepatic hilum. The fibrohistiocytic type was defined as having abundant histiocytic infiltration involving foamy cells or multinucleated giant cells. Venous occlusion with scanty inflammation and cholangitis without periductal fibrosis were often seen. Mostly occurred in the peripheral hepatic parenchyma as mass-forming lesions.8

Until recently, surgical resection was the preferred treatment for pseudotumors. With the discovery of IgG4-related disease, use of corticosteroids in pseudotumor has increased.18 Many case reports have suggested variable success with corticosteroid use. Shibata et al.19 had reported a similar case of 72-year-old man with hepatic IPT developed abscess after starting corticosteroids therapy, abscess resolved in the next 6 months. In this patient, steroid had resulted in liver abscess with recurrent hospital admission for fever.

Take home message is hepatic IPT is a rare benign tumor with vague symptoms of abdominal pain, low-grade fever, and loss of appetite. They are difficult to differentiate from malignant tumors as their variable imaging findings. To avoid inadvertent surgery, histologic confirmation of the hepatic mass is essential. Whenever in doubt after imaging, a biopsy will help in the diagnosis of a rare differential diagnosis, such as hepatic IPT. Antitubercular therapy should not be used without diagnosis. Steroids should be used with caution with close follow-up to prevent iatrogenic complications like a chronic liver abscess. Surgical treatment should be offered after failed medical management.