Due to several factors, the incidence of GERD has been increasing in Asian and Western countries.1,2 Therapeutic strategy for GERD mainly involves the use of proton pump inhibitors (PPIs). Despite treatment with standard PPI dose, unfortunately, 20 to 30% of patients still suffer from troublesome GERD symptoms.3 Persisting GERD symptoms cause discomfort, impair quality of life, and affect mental state and social activities. Likewise, the subsequent development of mental disorders, such as ANX, and depressive symptoms also plays a crucial role on GERD symptom deterioration and has a negative effect on people's quality of life.4

As a self-report questionnaire may be able to provide multidimensional and normative data, the SCL-90-R is widely used for all psychiatric patients. Some medical groups applied SCL-90-R to evaluate the psychological state of patients with chronic diseases.5,6 Previous studies suggest that the SCL-90-R could be valuable in evaluating psychological factors and, therefore, recommend it for psychosocial investigation in varied disease clinical practice.7-9 However, data from patients with persisting refractory GERD symptom based on SCL-90-R questionnaire have not been properly evaluated.

This study focused on the psychological state of refractory GERD patients using SCL-90-R. We intended to find the differences between several conditions of refractory GERD symptom and to assess if SCL-90-R would be a new, simple method for screening patients with GERD in a community hospital. Consequently, it may be helpful for gastroenterologists to choose relatively precise diagnostic approaches.

The target patients were all with persisting GERD symptoms after 8-week trial of once-daily PPI therapy from October 2010 to November 2015.

The SCL-90-R consists of 90 items, evaluating psychopathological and somatic status on a 4-point scale. The scale ranges from 0 (absence of the symptom) to 4 (maximum disturbance). These items are divided into nine scale markers as: DEP; somatization (SOM); ANX; obsessive-compulsive behavior (O-C); hostility (HOS); interpersonal sensitivity (I-S); phobic anxiety (PHOB); PSY; and PAR. Every dimension includes 6 to 13 questions. The score on each dimension represents the mean score of the dimension and directly reflects the severity of the mental health problem. Subscale scores ≥2 were suggestive of potential mental health issues. The global severity index (GSI) indicates the mean score of 90 items.11

Based on endoscopy, HRM, and impedance-pH monitoring, we divided patients into subgroups, such as NERD, RE, FH, HE, DES, hypertensive, weak peristalsis, and achalasia. The diagnosis was made and classified according to the Chicago classification and previously published criteria.12,13

Data analysis was performed independently by two investigators unaware of the status of individuals. The data were shown as mean ± standard deviation. Analysis of variance for continuous variables and Pearson's chi-square test for categorical variables using Statistical Package for the Social Sciences version 13.0 was accomplished. A p-value <0.05 was significant and all p values were two-sided. 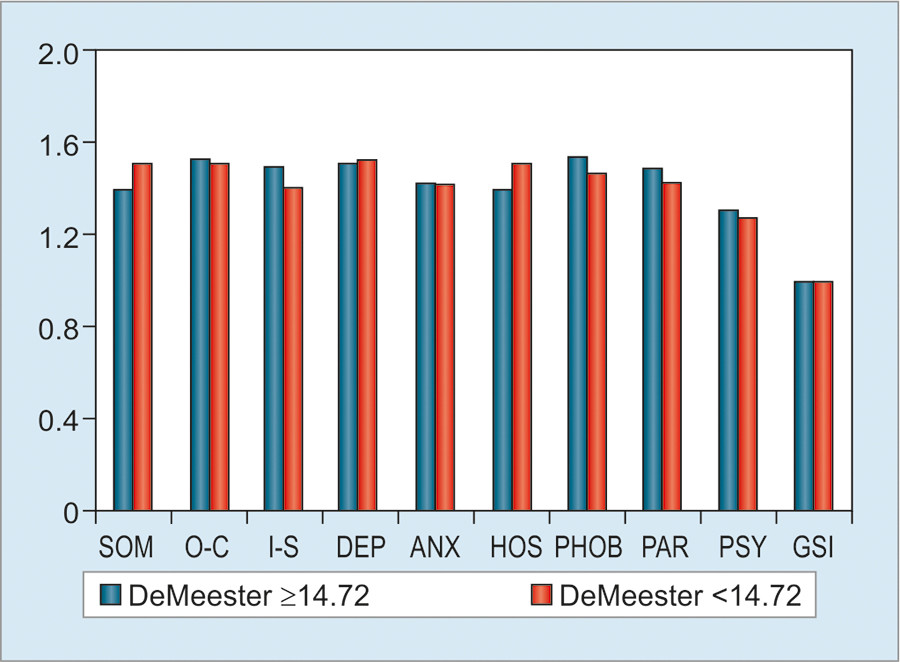 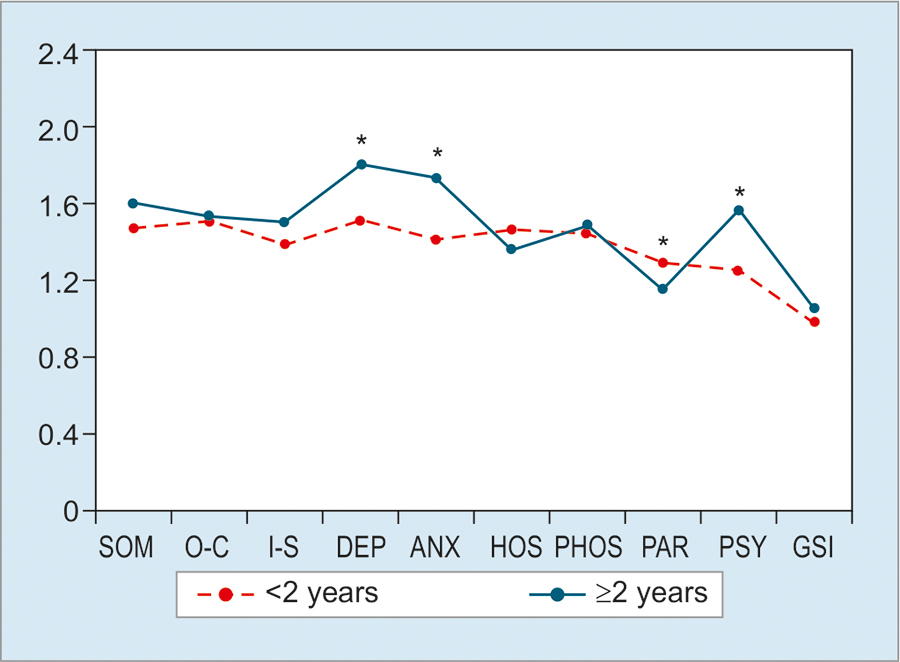 SCL-90-R scores based on symptom. Significant differences were seen in SOM, ANX, and PSY domains and GSI. *p < 0.05 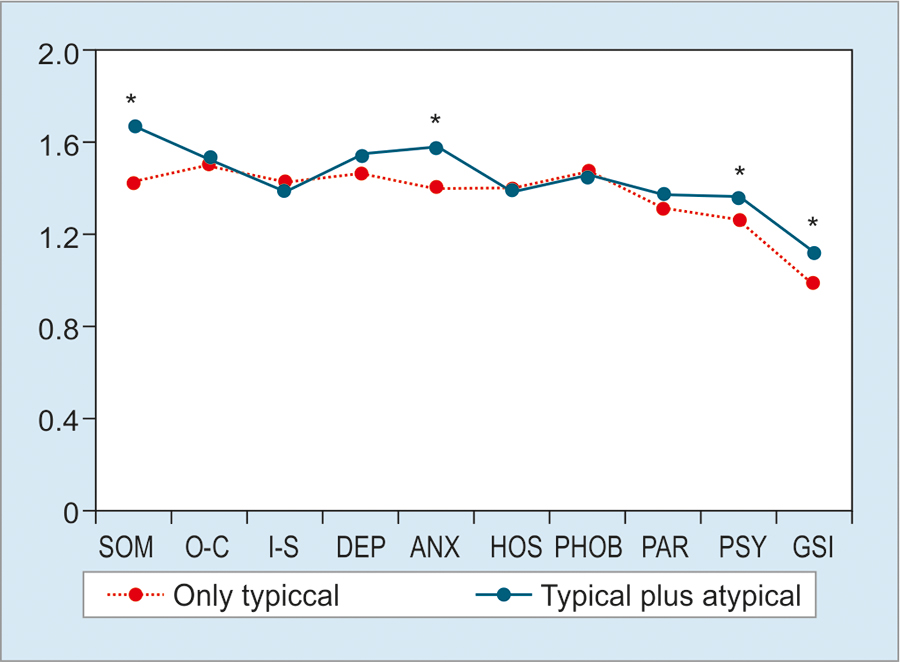 SCL-90-R scores based on gender. The scores of females were significantly more than those of males in all domains and GSI. *p < 0.05 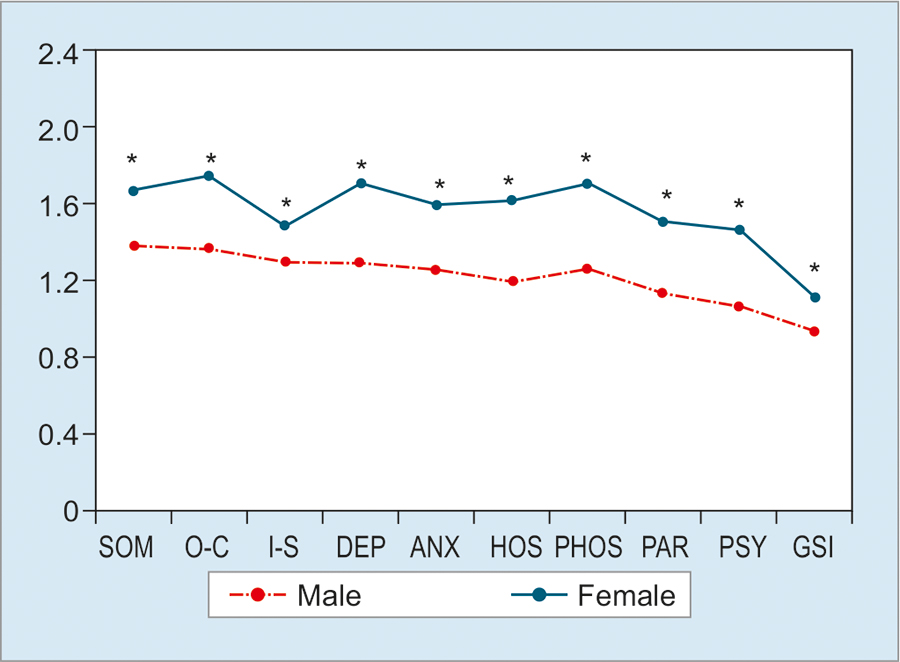 Psychosocial factors are able to exert influence on deterioration of disease, symptoms, responses to treatment, and the quality of life. Researchers evaluated the psychological status of patients with chronic disease using SCL-90-R questionnaire. A link of GERD and psychopathological features has already been demonstrated by several studies.14,15 We analyzed the data from the patients with refractory GERD symptoms in order to acquire their psychological characteristics, which may be helpful for making diagnosis and clinical strategy.

In this study, O-S and I-S, which are stable personality characters and are referred as personality, were not found to be statistically significant between these patients. But, differences were found regarding DEP, ANX, PAR, PSY, and GSI domains. The results suggest that the psychological status perhaps does not have close relationship with acid reflux. Remarkably, achalasia showed more psychological factors. Considering that achalasia is an unknown congenital disease, those factors will certainly exist because of refractory GERD symptoms. They probably are the result of symptoms from which patients have suffered for a quite long duration. Taken together, it appears that psychological factors will have a distinct effect on chronic diseases.5,16,17

With our other comparison results based on DeMeester value, we did not find difference between pathological and normal acid reflux. This strongly supports our suggestion that psychological status does not relate to acid reflux again. Possible reason is that the universal usage of PPIs has effectively controlled acid reflux; therefore, this makes patients benefit from reducing mental stress.

The analysis of symptom duration in this study showed that the patients with more duration had more problems regarding DEP, ANX, and PSY. Considering gender difference, we investigated the data divided by females and males. Our results are consistent with those of Núñez-Rodríguez and Miranda Sivelo17 that women had dramatically higher scores than men in these nine domains by SCL-90-R. Due to more and more researchers paying attention to gender difference in chronic disease development,22-24 we assume that the difference between females and males is worthy of further investigations.

Regarding the measurement of mental disorders with SCL-90-R, some limitations are also prevailing in this study. The processes including interviewing, diagnosing, and rating were done by experts in our gastroenterology department. Although our research team acquired the assistance of psychologists, the results were likely to have a little bias. Moreover, the samples in this study were regional instead of a being nationally representative. Differences across cities and countries may occur due to differences in sociodemographics. Large-scale multicenter studies need to be carried out in future.